“Looking for a race report on speedylizard…” was the text I got from a friend.  It was proof, yet again, that I had been slackassing on getting a race report done for the ITU Cross Triathlon World Championships held in Penticton, Canada.  It was also a reminder that I have at least one person that reads my blog.  Well, I suppose I should throw it out there.  Heck, maybe even some of the folks who are racing tomorrow might be looking for something to read… to put them to sleep.

Alba and I got to Penticton, home of over 300 wineries, a day before our housemates, Jen and Phil Horstmann along with Chrissy and Chris Haloris.  Want a fun bunch of folks.  Nothing like sharing a house with some great XTERRA Family.  Of course, our view just absolutely sucked.

Our AirBnB digs just happen to be sitting smack dab in the middle of a vineyard.  The owner even provided us with a couple of bottles from the winery that buys his grapes.

Since we were there early, I decided to throw the bike together and get in a full preride of the course.  The first 3 or 4 miles of the course was on the Kettle Valley Rail Trail, which as the name implies is a rails-to-trail with a gravel surface wide enough for, you guessed it, a train.  After that, it turns into steep, technical single-track, which I just loved. 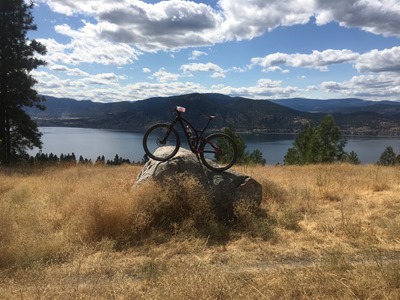 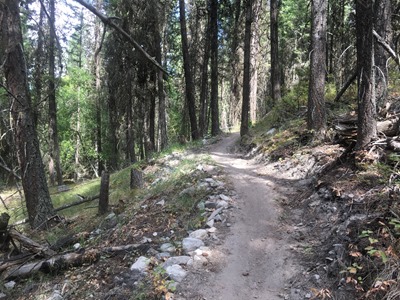 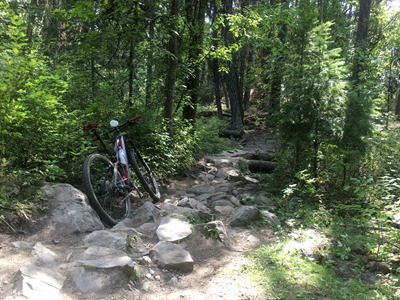 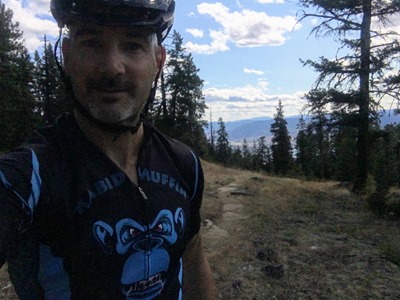 Unfortunately, my day was cut short just when the fun, descending section hit.  I fell victim to a flat tire and in classic Marcus fashion, I had forgotten my seat bag.  With no way of fixing the flat and needing to get to the Parade of Nations, I found myself running in bike shoes to the trail head which also happen to be several miles away.  A quick call to Alba for a rescue pickup and we made the parade with time to spare.

The next day, Alba dropped me off at the top of the climb and I was able to ride the downhill portion with good friends, Deanna McCurdy, Kristen Wade and Al Wade.  We had a blast of a time riding down and followed it up with some great apple slushies. 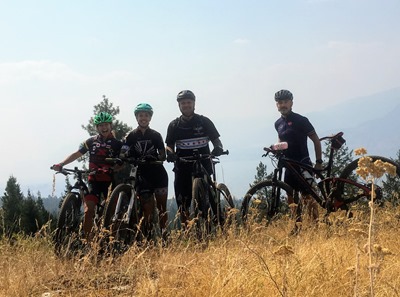 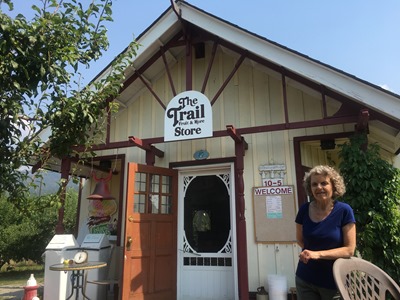 Since we were in Penticton during the eclipse, our landlord, Grady, came over to show us a quick and handy way to view it using a spotting scope.  We just pointed it to the sun and let it focus on a piece of paper.  Pretty snazy.  We also attempted to set a world record to be the only folks within viewing distance of the eclipse to play horseshoes during the event. 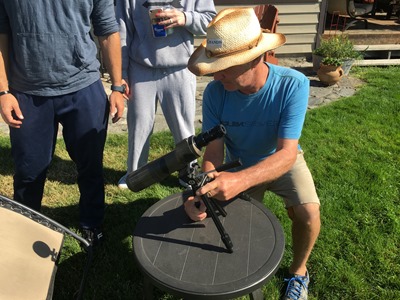 Fast forward to race day.  The day before we had to check-in our bikes and leave them overnight.  Everything with the ITU (International Triathlon Union) is all o-fish-y-al and all.  Heck, they even checked my bike for a motor.  I joked with them that I really needed one to keep up with the fast boys in my group, but they didn’t seem to find it too funny.  Anyhow, I got a great spot assigned to me near the end of the row.

The race consisted of a 1500 meter, point-to-point swim in a horseshoe shape.  There were flags and a very straight line scratched in the sand to which we had to toe the line.  Calvin Zaryski even got yelled at for having his toe ever so slightly over the line.  With a quick blow of the horn we were off.  Like clockwork, there were several waves of competitors going off, one right behind the other.  In addition to the pros, there was another wave of age-groupers ahead of us.  By the time we got to the mid-point of the swim, we were catching the previous wave.  Early in the swim, I found a good person swimming slightly faster and I chose to draft, but when we hit the wave of folks ahead of us, it became crowded very quickly causing me to lose him.  I came out of the water feeling pretty good and ready to get on the bike. 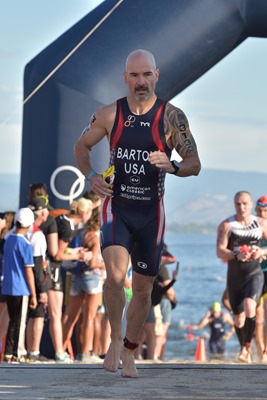 I had a very quick transition and managed to get out onto the bike without any issues, even passing a few people in the process.  After passing a couple of folks on the steep, paved section going up Vancouver avenue, I hit the Kettle Valley Rail (KVR) trail.  One of the guys I passed on the way up made his way back in front of me and I hopped on his tail.  We stayed together pretty much throughout the climb, conversing and just having a good time. 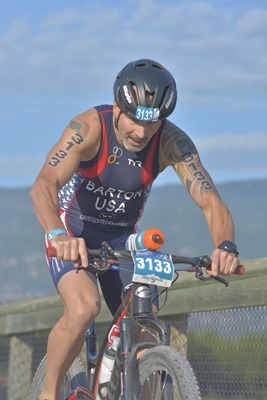 The technical descending was the most fun part with me doing the “wheeeee” like the little pig on the commercial.  I felt smooth and even managed to get a compliment thrown my way as I whizzed past one of the locals in his full face helmet and pads.

Hitting the KVR on the way back, I hooked up with Jeff Neilson.  We chatted along the way and decided to fly down the steep paved section side-by-side once we got off of the KVR.  My watch recorded 42 miles per hour, which is pretty darn fast on a mountain bike (at least for me).  In my speedy downhill section, I completely forgot to get out of my shoes.  I had planned a barefoot dismount going into transition but found myself hopping off the bike with one foot out and one foot still in the shoe AND still clipped into the pedal.  Needless to say, I almost ended up crashing into one of the fence barriers as I stumbled one legged for a bit before I could get my foot unclipped.  I ran into transition with one shoe on and one shoe off.  Total rookie move. 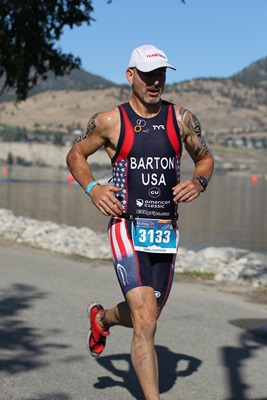 After a short jaunt on pavement, we dove into singletrack which was fairly non-technical, but hilly and along the bluffs of the lake.

Once we ascended the bluffs, we were met with a few miles of running on an out-and-back section of the KVR trail.  I would have felt a lot better with all, technical single-track, but I made the best of it and tried to maintain a good pace.  I saw Calvin on his way in and gave him a high five, along with encouragement of everyone I came across. 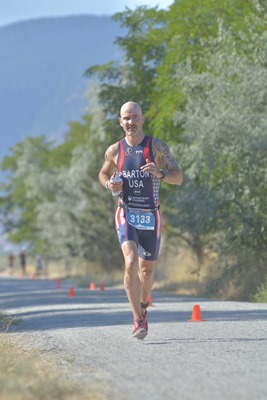 Once back onto single-track, we had to descend the bluffs to the lakes edge and run back towards the finish.  The beach was only 5-10 feet wide and many sections of it covered with brush and trees.  In some places you could go under or over the trees, but in others you were forced to run out into the lake to get around.  This was a BLAST and the kind of racing I really, really enjoy. 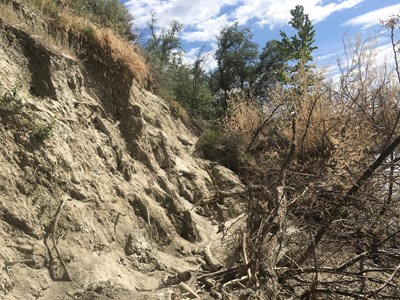 After dumping back out on the pavement, I ran past one of the female pros and spotted two guys ahead of me.  I asked the pro if she thought I could reel them in and she responded with, “Of course you can.  Go get em!”  I picked up my pace to try and run them down.  I lost sight of them as we weaved in and out of the marina, shops and resturants and along the backside of the park.  It wasn’t until we turned left at the peach and onto the final stretch that I saw one.  I grabbed an American Flag handed by our team coach and tried to run him down.  As I sprinted past him, the crowd started cheering, giving away my sneak attack.  I should have held off a little longer before attacking, but since I was already pulling up beside him, he had enough time to pick the pace back up.  The crowd became louder and the announcer started, “Barton or Girard, who’s it gonna be?  Girard or Barton. Barton or Girard?  Sprint finish, who will come out on top?”  Needless to say, Evan had better legs than me at that point, so he beat me across the finish line.  I gave him a big hug and congratulated him on a fine sprint. 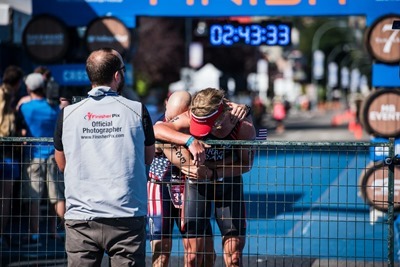 I ended up being the top American in my division, coming in at 6th place behind some super fast boys.

All-in-all, I was very impressed with the course that was laid out for us.  I’ll be honest, going into it I didn’t have very high hopes.  There have been a couple of ITU Cross courses that were nothing more than a road tri on dirt. This course in Penticton ended up being, what I would consider, a good measure of an all-around athlete. It didn’t cater to an athlete that may be really good at one type of course or excels at one particular skill.  I think they did a great job!

Upon finishing, we were presented with a Penticton beanie which I LOVE.  One of the coolest race gifts ever. 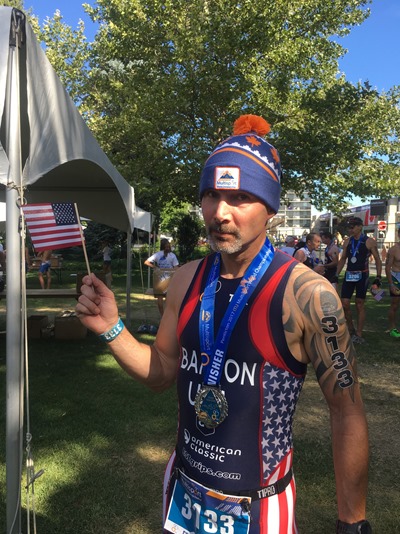 It was also wonderful to have our AirBnB hosts, Grady and Gail come out and cheer us on at the race.  They managed to cheer us from several spots on the course and even take some great pictures like this: 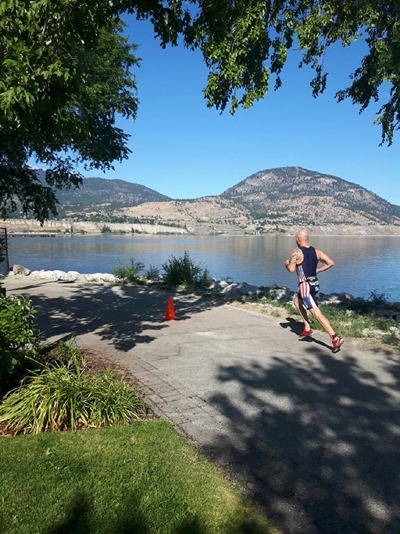 The gang headed out for some good eats, but not before I had this (just) dessert, first.  Yep, that’s strawberry layered cake on top of a strawberry milkshake.  They told me it was zero-calorie and I took their word for it.

My bike just wanted to rest and enjoy the view before being packed up in its case for the trip home.