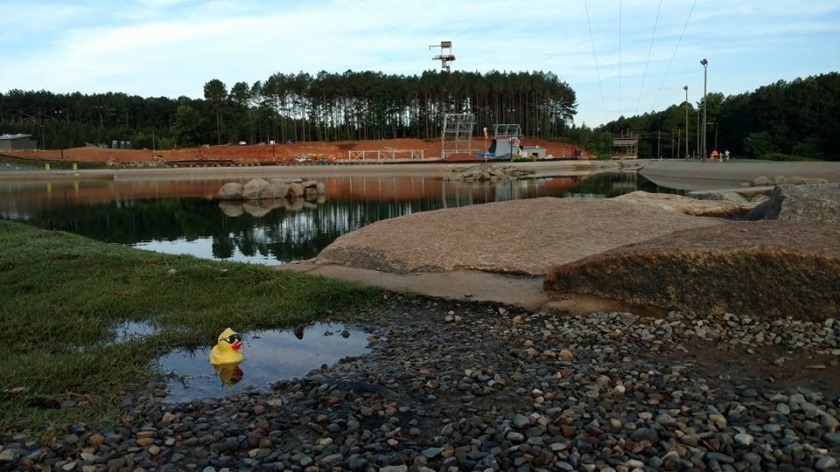 July 14, 2016 Marcus Barton Race Reports, Triathlon Comments Off on I’ll Tumble For Ya in the Woods–XTERRA Whitewater

It was slated to be a hot one and with the torrential downpour the night before, it was also a slick one.  Hot.  Steamy.  Slippery.  Take those ingredients and mix it with a hard course and you have yourself one tough-as-nails race.

Showing up race morning, not only had it rained, but the winds had blown everything out of whack.  Cones were strewn, transition had taken a beating and pop-up tents were completely missing.  The folks at the Whitewater Center had their work cut out for them.  They quickly got things squared away and before you knew it, transition was beginning to fill up.

I knew that Caleb and Dwayne would give me a run for my money to get on top of the podium, with Dwayne being favored for the win.  My only chance was my intimate knowledge of the trails, knowing just about every root and rock out there.  With that said, we saw some new faces in the crowd and I wondered if there would be a contender in our midst.

With a quick setup of my transition spot and pre-race warmup, I began to hear the announcement to head down to the distant swim start.  Our swim was in the Catawba River, a half-mile run from transition.

Before getting our toes in the water, the crew did an outstanding job of getting us prepped for the race. 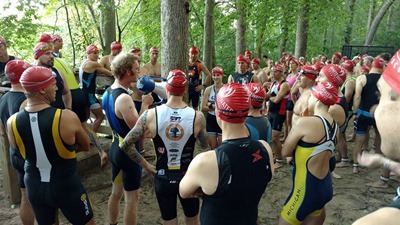 The race directors always do something a little unique at this race.  They start the swim in two waves.  Although two waves may not be unusual, how they determine the who goes in which wave is.  They ask that anyone not concerned so much about time to hold back in the second wave.  There’s no deduction in time, as they only do a single gun time.  This way, anyone competing for a spot on the podium can all start in the same wave, regardless of age group.  I know that sounds a little weird, but it was genius.  It truly made everyone happy and worked very well. 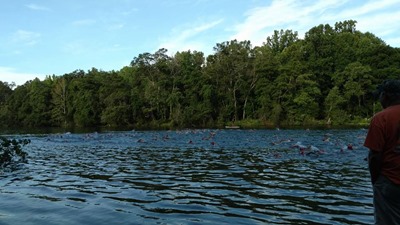 Ali Arasta jumped in the water next to me, as did Mike Smith and a few other buddies.  With everyone one in the water and after a countdown, we all took off in lukewarm water.  I swam the 1000 meter rectangular course trying to pace myself the best I could without going too slow or too fast and blowing up.  I managed to come out of the water in fourth and by the time we ran to transition, I was in 3rd.

The 14ish mile bike course was slippery as snot.  At XTERRA Whitewater, you have about 2 seconds after entering the woods before you hit a technical descent to the Figure 8 trail.  Slick red clay and wet roots gave me an instant preview of how slick the trails were going to be. Figure 8 is only about a mile in length, but has 8 bridges.  I approached the first two with caution but they turned out to be ok.  The third bridge, both Caleb and I hate.  You descend towards it and just before the bridge you have to do a quick left and then right S-turn before crossing the bridge.  Even in dry conditions, it freaks me out a little because I bomb the downhill so fast, that I usually enter the bridge near the left edge but still make it across. Only this time around, I hit it in the same spot, but with a different result.

As soon as the front wheel hit the bridge, my bike came out from under me and I slammed down onto the bridge both of us sliding across the bridge, off of the bridge, into the bank on the far side and then into the creek.

“DAMNIT!” I exclaimed out loud.  This was similar to my experience in Knoxville.  As I reached into the mud to grab my dislodged water bottle (couldn’t leave my Roctane behind), another rider come scooting across the bridge.  I looked up, my chin even with the bottom of the bridge, I caught a glimpse of their shoes as they went by, meanwhile asking if I was ok.  “I think so, “ I answered.

I climbed, digging my hands into the bank, and clawed my way back up onto the trail.  After a quick glance of the bike to make sure nothing was busted.  The bike was ok, but I was bleeding pretty good from a gash in my right leg, just below and outside of the knee. I hopped on and proceeded to try and catch up and felt a nice trailrash “raspberry” on my right hip where there was a newly ripped hole in my tri suit.

Within the next 2 minutes, I hit a clump of roots, using the same line I had a hundred times before.  Again, the slick-as-ice death roots would prove themselves a worthy adversary by putting me on my butt again.

BAM!  Without warning, I found myself half wrapped up with a tree and my bike, laying in a knot on the ground, this time on my left side, banging my ankle and foot in the process.  I jumped up and took back off, throbbing foot and all.  I now had matching raspberries on both hips.

Regardless of crashing twice in the first mile of the race, I managed to get back up to what I believed was the number 2 spot of the race.  It was a chore to do so, as all the winds had also added debris all over the trail, including numerous fallen tress that you had to hop off and climb over.  A  little over 5 miles into the race, I came across a family that was just out for a hike and enjoying the trails.  I rang my bell two times to let them know I was coming and as soon as I heard my own ding-ding, I heard another ding-ding from behind me.

Recognizing the bell, I exclaimed out loud, “Oh crap, that’s Caleb!” where he could hear me.

“You were going down Tower 93 kind of slow,” he goaded, giving me a little bit of a hard time since he knows I’m a nervous on the jumps, and even more so giving the slick conditions.

“Yeah, yeah.  Whatever,” I replied as he passed me. 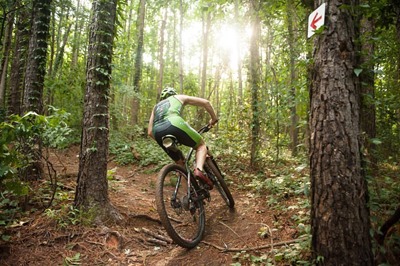 “That puts you in second place, Caleb.  Dwayne is up there somewhere,” I added.

We trucked along.  By the time we pulled out of the Toilet Bowl trail, he had gapped me a little and was out of sight.  I passed a photographer and asked him what place I was in, to which he replied “second.”  I quickly dismissed it, knowing that Caleb and super-fast swimmer, Dwayne was up there too.  I came across a muddy section that was smooth and flat from the previous night’s rain with the exception of two sets of bike tracks.  “See, I AM in third,” I thought to myself.

I entered into the East Main trail fully expecting the technical and hilly 6ish miles of trail that lay ahead.  About half-way through that section, I came across another non-racer riding his bike.

“The leader is right up there on that climb,” he offered without my solicitation.

“Yep,” he replied with confidence and certainty.

I quickly surmised that the second set of tracks must have belonged to him.  What happened to Dwayne?

Coming into T2, Caleb was squarely in first place and I was in second.  Everyone I asked confirmed it.

After a quick transition, I headed out onto the 4 mile run with a goal to run Caleb down.

The run consisted of running to the new Academy Loop trail, running one lap of it and running back.  In all, it totaled a little over 4 miles, but a very tough 4 miles.  With lots of twists, turns, dips, dives and climbs, it’s definitely one that feels harder than 4 miles, especially given my throbbing ankle and left foot.  Here’s a quick 30 second preview of this trail:

In the end, I didn’t catch Caleb and he finished first place with good friend, Ali Arasta, finishing third.

On the women’s side, first place was Amy Carver, followed by Angie Childre and in third was Elizabeth Skiba. 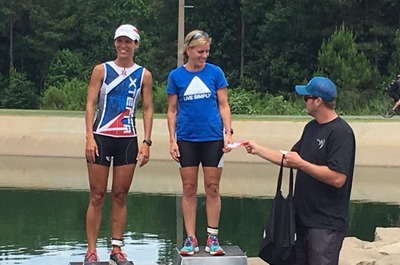 We later found out that Dwayne also took a nasty spill at the beginning of the race and had to call it a day.  It sucked not having you out there, Dwayne.  We had a blast and you were missed.

Unless otherwise noted, all photos by Debra Jean Goodnight Dandro.