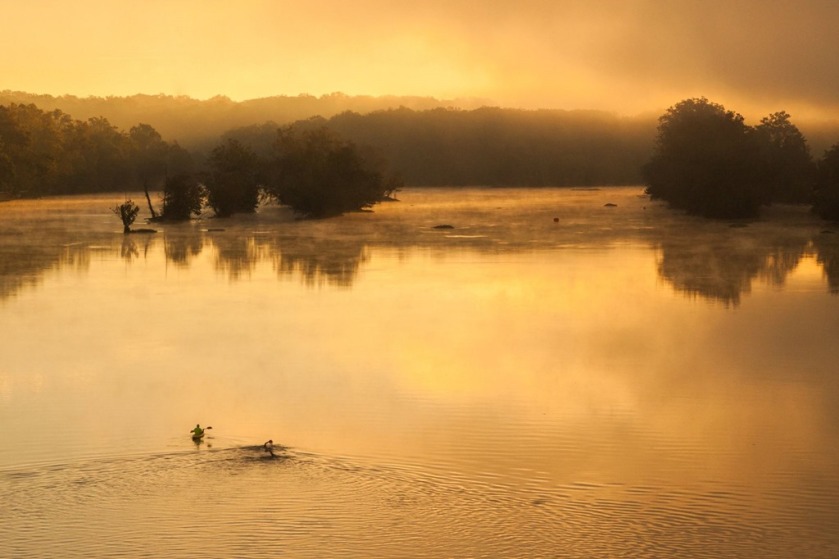 One of the primary premises behind the sport of swimrun is connecting the athletes with nature.  If you ask Michael Lemmel, race director of OtillO, he’ll be quick to tell you that it’s about the athletes moving through nature and becoming one with it.  I’d have to agree with him.

So, when it comes to having a swimrun race, most folks wouldn’t think of having one right in the middle of a large city like Richmond and if I hadn’t raced XTERRAs in Richmond before, I would probably have thought the same thing.  When I stumbled across that there would be the SwimRunVA race held on some of the same trails of the XTERRA, it took me all of about 2 seconds to make a decision.  I had to do this race.

I reached out to Jim Fisher, local Richmond athlete and an XTERRA friend of mine to see if he was interested in teaming up for the race.  Being an avid racer and lover of adventure, he didn’t hesitate to say yes.  As the race approached, I received bad news that Jim tore some of those important tendons around his knee and would need surgery.  Of course, this knocked him out of the race, for sure.  After some further searching and pleading with folks on social media for someone as crazy as us, Keith Schumann, another XTERRA athlete stepped up.  With zero time training together we found ourselves at the start line before you knew it.

The race course looks a little something like this:

I’ll spare you the turn-by-turn details, but it was 6 separate swims and 7 runs totaling 3.37 miles of swimming and 15 miles of running.  We started the race at the 3Sports store parking lot and after a countdown, we ran across the Huguenot Bridge, down to the kayak launch, and started our first swim.  Right from the start, Keith and I established a pretty good lead and felt like we had a good, sustainable pace.

Once hitting the water, we were greeted by a beautiful sunrise swim in some pretty foggy water.  The air temp was a balmy 50ish degrees with the water being around 60.  Even though we couldn’t see the buoys right away, there were plenty of kayak volunteers in the water for safety purposes and willing to guide if necessary. 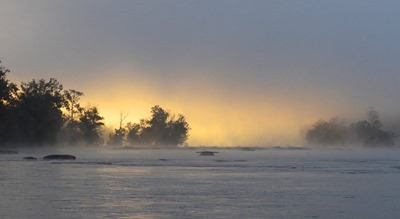 Keith and I started our downriver swim towards Williams Island where we’d have a quick romp across the island in order to get around the “hydraulics”, a small dam in the river.

Once across the island, we had to pick a good line to make it across the river and to the other shore.  This part of the river was a bit more shallow and was strewn with large rock croppings and boulders.   Picking a bad line would not only bash you into the rocks, but could cause you to end up down stream past your exit point.  Here’s a photo taken by a person standing out where we needed to end up.  Keith and I are doing a quick assessment of where we needed to make our way through the varying currents and rocks in our path.

There were numerous swims where reading the currents were vital.  Equally important was being able to adjust to changing current.  A good example is one swim where we crossed the river under the Westover Hills bridge where the current would get very swift and then very calm depending on where the rocks were.  One minute we’d be swimming straight across the river and the next we’re getting slammed by current.  To counter it, we’d have to turn almost 45 degrees from the shore to counter the current.  It was a lot of fun battling the river.

The runs were just as much fun with an interesting mix of pavement, concrete and trail.  We were constantly visually stimulated by trains, beautiful homes, canals, historic ruins and more. 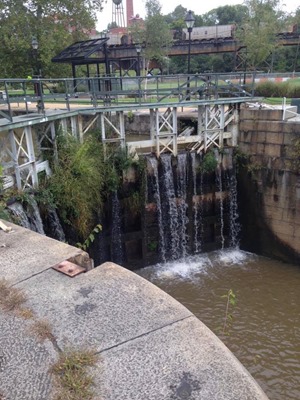 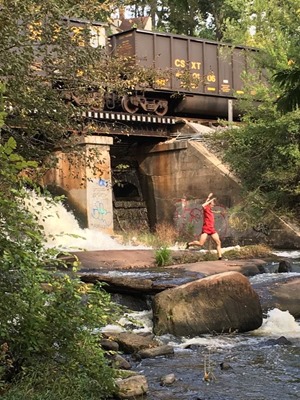 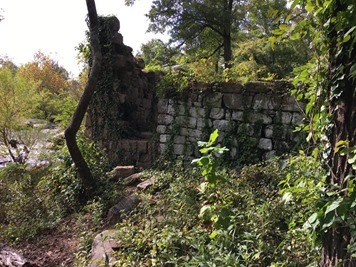 The last swim was sort of a nice break from battling the currents since the entire leg was a downstream, flatwater swim.  We finished it off and headed to the last run leg. 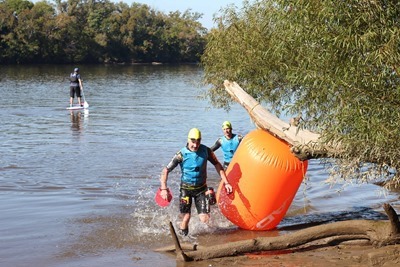 The last run was the most interesting of the various “urban runs” which included a long stretch on a pipeline that ran underneath the railroad trestle. The entire thing paralleled the river which gave us a beautiful view. While running it, Keith and I conversed at how cool it was. I’d much rather run trails than pavement or concrete, but the sections that weren’t trail were just as much fun. 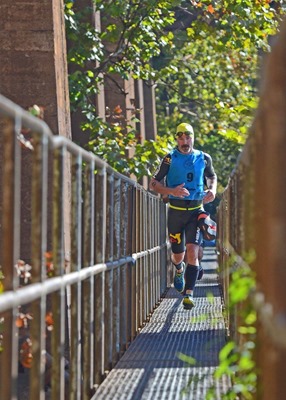 We maintained the lead for the entire race and finished first overall. 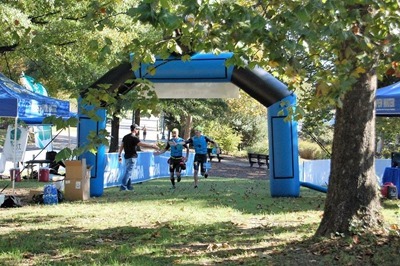 Keith kicked arse in his first swimrun race!  I think we made a pretty good pairing since our strengths are fairly close.  Where I was weak, he was strong and vice versa, so I think we pushed each other pretty good where we weren’t matched.  You’ll have to ask him if he’s been bitten by the swimrun bug.  I think he has.

I really think this race has the ability to be big with the swimrun community.  The crew did an outstanding job of laying out a course that was both interesting and tough.  My only wish is that they use the dry riverbed section (commonly referred to as the dry way or dry rock) on Belle Isle as part of the course next year.  I think it would take the difficulty up a notch and add even more European swimrun style to the race.  The course was well-staffed with volunteers and race staff that went above and beyond to ensure everyone was taken care of, including both water and land.

I can’t wait for next year.