It’s hard to believe that the XTERRA East Championship race was over A MONTH ago.  With everything going on (vacation, getting ready for XTERRA Whitewater, you name it), it’s been difficult to get this race report done.  Alas, here it is.

Dan and I headed to Richmond Saturday morning since our day jobs wouldn’t allow us to get out of town sooner.  We debated leaving Friday afternoon, but it just didn’t pan out.  After arriving, we shot straight for the course to go for a pre-ride.  We hit the XTERRA University clinic hosted by Conrad Stoltz and Melanie McQuaid.  If you haven’t hit one of these clinics at the Championship races, you’re missing out.  No matter what your skill level, you could still learn a thing or two.  Even if it’s little tips and tricks about the course, I always pick up a few nuggets.

After XTERRA University, we picked up our packets and headed out onto the course.  We rode portions of the course that were reverse from last year just to get a feel for the flow.  We bailed out on the rest of the course in order to reserve our legs for the race.

Race morning, we headed down to the transition area and began to setup.  I looked up and saw a BEAUTIFUL sunrise. 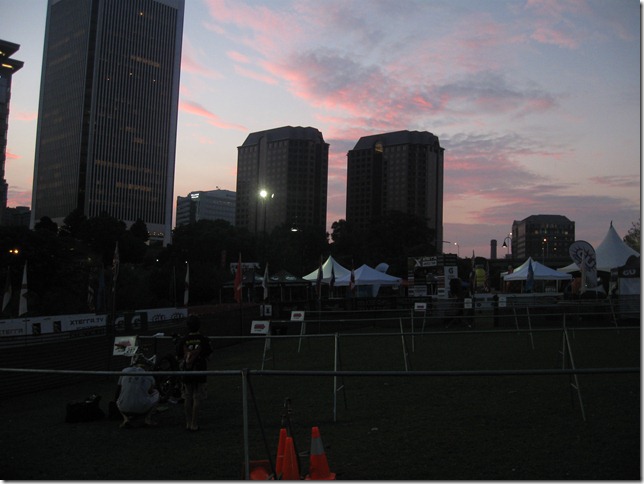 We took off on the swim in three waves.  Pros were first, men up to 39 in the second and everyone else (including me) in the last wave.  There wasn’t as much of a current in the James River this year, but that was due to less rainfall than last year.  Unfortunately, this meant a heck of a lot more climbing, crawling, and swimming over rocks.  I just couldn’t seem to get into a comfortable rhythm.  The very second I felt like I had a rhythm going, I’d hit a rock.  I’d try my best to shimmy across the rock without wasting too much time.  I decided to try and sight a little more to see if I could spot anyone having to crawl over something in front of me.  It was a futile attempt as the entire field in front of me looked like a bunch of whack-a-moles popping up and down.  We made it to the island, a quick romp across the island and back into the river for the return swim. 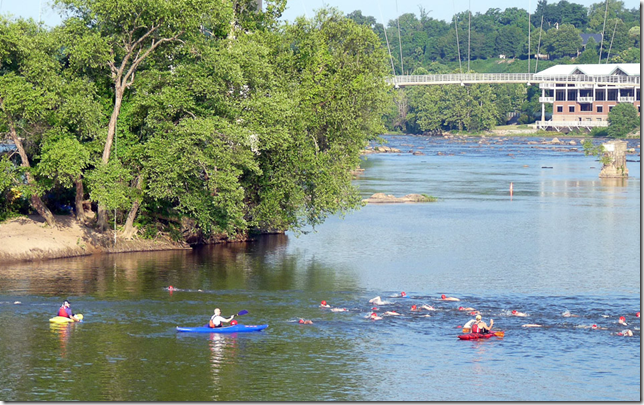 Coming out of the water, I felt pretty good, but still a bit frustrated that I couldn’t get a good rhythm going.  I headed for T1 as quickly as I could.  I was happy that we weren’t forced to run down the pea gravel embedded sidewalk.  There were a steady stream of swimmers coming out of the water and into T1.  This meant that I had to contend with traffic and passing during the bike leg.  My goal was to beat as many of them out of transition as I could.

T1 went fairly smoothly although I did have a bit of trouble with my shoes.  Unlike some of my brethren, I choose to put on my shoes in transition for certain races (this being one of them).  This time around, I hadn’t pre-positioned my straps properly, so it caused me a bit of time getting them on and strapped.  Like going into transition, there was a steady stream of folks coming out.  We had a short road ride before we came to the concrete bridge that crosses the river. 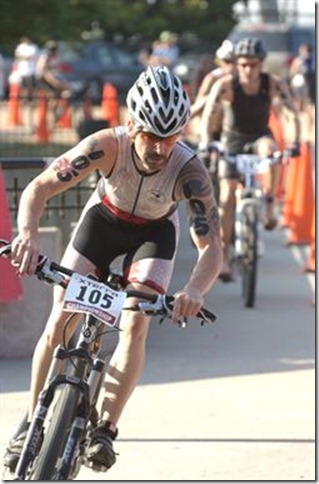 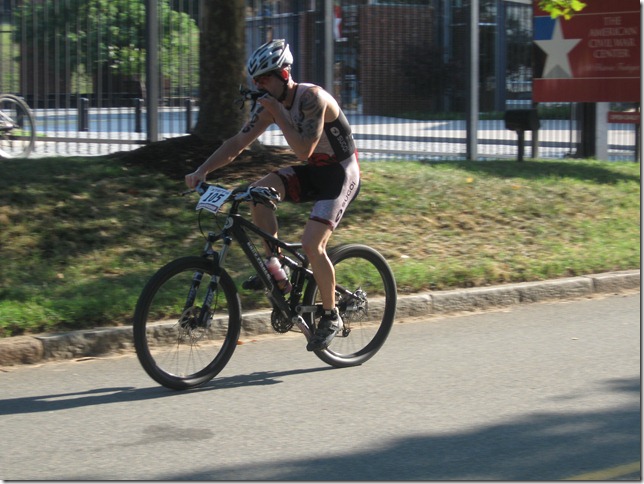 Running up onto the concrete bridge and over the river, fellow 40 year old, friend, and MelRad Alumni, Frank Fernandez-Posse yells out to me from behind.  “Go, Marcus!”  Frank and I had chatted on the phone a couple of times leading up to the race.  We were both excited to be there and to duke it out a bit.  We headed over to the island where we engaged in a little fast fire road riding along with some sweet single track.  As we departed the island, Frank was still hot on my tail and passed me on the rickety wooden bridge that crosses the dryway.  He pats me on the back as he passes and says, “Come on, let’s go.”  I tucked in behind another rider he passed and the three of us headed for the stair case.

The staircase is a three-story tall, concrete, spiral staircase that we have to climb in order to cross a set of railroad tracks.  Originally designed for pedestrians, it is a bit difficult to climb it with a bike over your shoulder.  Luckily, unlike last year, we only had to climb the staircase once and did not have to descend it.  After crossing the railroad tracks, we rode some of the sweetest, fun, and technically interesting single track courses on the circuit.  With drops, tunnels, weird bridges, and some of the greatest trail maintenance I’ve seen, Richmond is just a bit different than most trail systems out there, especially for one located smack-dab in the middle of the city.  The local trail gnomes have done a tremendous job with some of the brick and stone work.  Absolutely amazing. 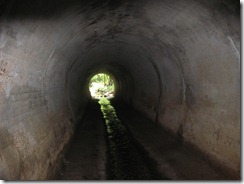 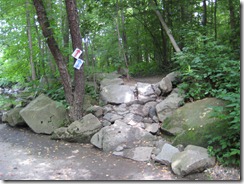 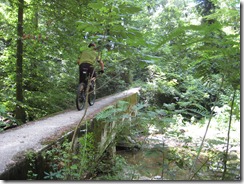 I continued to keep Frank, a great biker, in my sites as we rode the trails.  He maintained a good two or three rider spots ahead of me.  As we caught up with the tail-end of the first amateur wave of riders, this proved to be a little difficult.  With every person that I had to pass, it seemed he’d squeak a little bit further out of sight.  At one point, another rider and I became a little tangled up during a poor passing attempt (on my part).  I apologized profusely as I continued my Frank pursuit.  By the time I got going again, he was completely out of sight.  I searched through the switchbacks for him but just couldn’t spot him.  I had lost too much time passing and he was riding a good bike leg.  Once we arrived back onto the pavement at the end of the bike portion of the race, I had an opportunity to look straight ahead to see if I could spot him.  Nothing.

After a horrible T2 (I was flustered and seemed disorganized with my gear), I headed out on the hot run.  While fumbling with my hat and bib (see pic below), I looked up to spot a racer off in the distance.  I couldn’t recognize the person (he was too far), but it sure looked like Frank.  The signature bald head (like mine) and the coloring of the uniform made me think it was him. I set out to try and reel the person in, regardless of who it was. 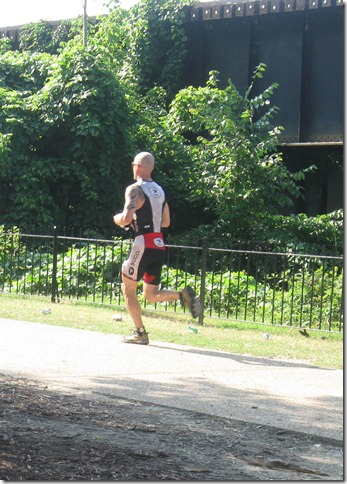 As I got closer, sure enough, it was Frank.  As I passed him, he gave me words of encouragement and I returned the favor.  He’d  been nursing an ankle injury and it surely showed up on the run (I hope it’s better by now, Frank).  I continued on to the flood wall and tried to maintain a good pace.  The heat coming off of the rocks, river and the flood wall was overwhelming.  I pulled back my pace a bit just so I could handle the heat.  After the floodwall I ascended the “Ruins” which is a staircase made of railroad ties.  Once on top of the ruins, I was really beginning to feel the affects of the heat.  The run quickly turned back to single track where I welcomed the coolness of the shaded trail and rolling terrain. 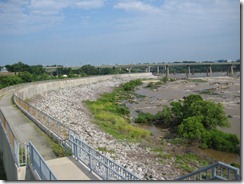 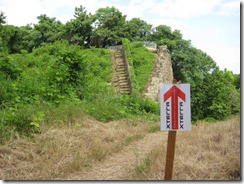 I passed one more person in my division just before we went onto the dryway, an area of large boulders and rocks.  I had asked Kahuna Dave the day before if we’d be climbing the hill on the island just after the dryway and he stated that we wouldn’t.  My strategy was to pick up my pace after the dryway and negative split all the way back. 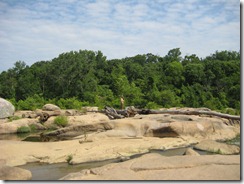 I picked up a rabbit just after the dryway.  Looking at his calves, he had a 45 stamped on one (which meant he was in the 45-49 division) and a permanent IronMan tattoo on the other.  Running at a pace just a little faster than I could maintain, I tucked in behind him and asked if he’d mind the company.  “Nope, let’s do it,” he replied.  I stayed right with him until I saw a red arrow pointing us up the hill on the island.  DRATS!  My whole strategy was ruined.  I had paced myself thinking that I had mile or so flat run left.  A last minute course change dictated that I’d need to quickly modify that strategy.  I didn’t have the juice or the mental capacity to attack the hilly trail on the island.  As I started to climb the island hill, both quads started to burn and cramp up.  I pushed through it the best that I could but lost my rabbit in the process.  I grunted, groaned and generally whined my way through the hilly singletrack and over to the other side of the island.  As I came out onto the flat section of the course, I could see the concrete ramp leading to the bridge back across the river.  I faintly spotted two runners ascending the ramp.  “I can catch them,” I thought.  I picked up the pace and attempted to reel them in.

Coming into the finish, I was 29 seconds off from those two guys, WHO JUST HAPPENED TO BOTH BE IN MY DIVISION!  Lesson to be learned:  Every second counts! 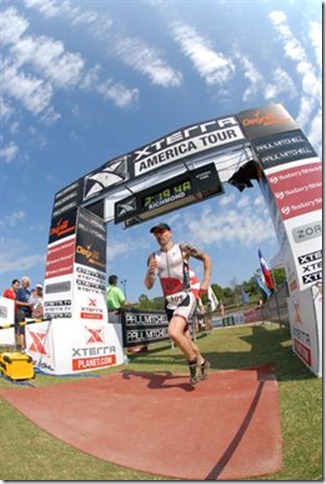 Final results were 7th in my Division (bleh) and 23rd overall amateur out of a field of 197 amateurs.  Due to my placement and one of the guys in my division being Canadian, I qualified to race as part of Team USA at the 2011 Cross (offroad) Triathlon World Championships to be held in Extremadura, Spain.  (yay!)