It was a last minute decision to do (a little over a week out) the XTERRA ACE Big Canyon in West Virginia.  My training buddy, Dan, and I had talked over the possibility of doing it, because we had also planned on racing the Uwharrie Rumble Half marathon the same day.  After further discussion with Coach Mel, Dan and Alba, I decided to do it.

There were various reasons why.  First, another friend of mine, Andrew Jones, did the race last year and had a blast.  If he didn’t have work commitments, he would have been there again this year.  Second, after the busted ribs and a poor showing at the West Cup, as well as Uwharrie, I really need the series points.  Furthermore, it looked to be a very interesting race with 1.5 miles of swimming (down river), 8 mile trail run (with about 1000 feet of climbing) and about 12 miles of mountain biking.  No, I didn’t say those out of order.  It’s a swim, run, bike (in that order).  I had a really hard time giving up the Uwharrie Rumble Half Marathon, but with XTERRA being my priority this season, it just made sense.

So Dan, his two sons, Danny, Jarrod and I took off late Saturday (about 7pm) to West Virginia for Sunday race.  My son, Aaron was celebrating his senior prom, and I had to be there for it before I left.  There was no way I would pass that up.  Besides, when do you get a chance to be really proud of your son AND completely embarrass him at the same time? 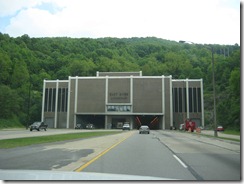 We arrived at the hotel/motel around midnight and settled into our drive-up room.  It didn’t look like a place that would have a heated pool and free continental breakfast, but the front desk attendant reminded me of such along with the “bar that’s still hopping with a live band.”

The next morning, after a restless sleep, we headed to the Ace Adventure Center for the race.   Upon arrival, we knew right off the bat that this place was going to be fun.  Just looking around at the facilities, all the cool water obstacles in the pond and knowing all the services (rafting, climbing, biking, you name it) means it would be a fun place to race.  Plus, when we looked around and saw the hills, we knew we were in for some climbing. 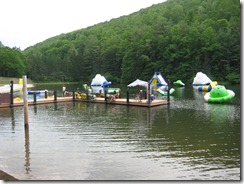 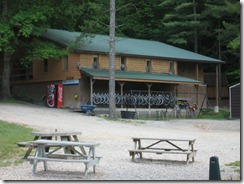 It was a fairly foggy morning setting up in transition.  The temperature was perfect for racing.  After arriving, I spotted Jo’s bike in transition.  It wasn’t long that we hooked up and threw around a few course strategies.

The swim portion of the race had to be nixed due to all of the rain that they had recently in the area.  Additionally, the water was contaminated with manure.  Glad thing they canned it.  This meant that the race would be in duathlon format with us running first then riding.  We took a 40 minute bus ride from finish to the start of the race.  Even though it was 40 minutes by car, it was basically around a mountain and to the other side.  Yep.  You got it.  We had to race up it.

Another great thing about running before the bike was a chance for me to race with my Nathan Trail Mix hydration belt, which also doubled as my bib holder.  I didn’t think I needed more than the 20 ounces it holds along with a Gu Roctane, so I opted to race with it over my Nathan Race Vest.  The belt would prove to be a PERFECT addition to the race. 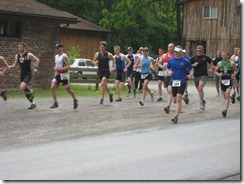 Before the start of the race, Dan and I had hatched a plan that since we weren’t swimming, how about running the entire race together pulling/pushing each other along.  With very little hesitation, we both agreed and the race was off.

At the beginning, we decided to establish a reasonable position early and then try to maintain that position.  We knew that we were in for a heckuva a gravel road climb, but that there was at least a mile or so of flat before we got there.  We established 2nd and 3rd place overall after leapfrogging a bit with Mike Miller.  During the long climb, I noted to Dan that it must be a lot of climbing since my ears popped twice doing so.

We trudged up the long climb and everyone behind us dropped out of sight.  After the trail turned to single track, we settled into a fast but reasonable pace.  Conditions were very muddy and we were both wondering how all of the folks were doing that we spotted wearing road shoes at the start line.

Side-by-side into transition, we both got onto our bikes in equally fast time.  As we were leaving transition, we spotted a guy coming into transition.  I told Dan that we needed to put some distance between us and him as he was right on our tail.  With that, we dove into the single track trail.

There was no end to the mud and rocks on the bike course.  Even with a Specialized Captain tire on the front and a Specialized Storm tire on the rear, the bike still tended to slip and slide like I was on skis.  There was that much mud.  At one point early on the course, I slid sideways (more like drifted) into a tree, bounced off, and kept on trucking.  It could have been nasty, as it was on the downhill side of a nasty drop.  Thank you, tree.

The two of us were having a great bike leg.  Great pace.  Fast, smooth, and handling even the most technical sections with ease.  And then…

We came across an arrow (blue for bike) pointing in the opposite direction.  Oh crap.  Dan rode a bit further down the hill where it opened up into a grassy field to see if he could pick up an arrow.  None.  Nadda.  We had apparently gone off course. So we turned around and backtracked to pick up the original course.  We came across a rider diving off of the gravel road where we missed the turn.  With the off course excursion, plus back–tracking, we had ridden an extra 2 miles.  Darn it.  Should have paid better attention.

The turnoff we had missed was the entrance to “Rigamortis”, a very sketchy, technical, rocky section that the race director had suggested everyone walk.  Upon entering the trail, without even speaking, Dan and I went from ‘hold a steady fast pace” to “hammer it”.  We quickly approached the rider who had just dove into the trail and he stepped out of our way.  “Thank you so much,” I stated.

We continued hammering it down Rigamortis on the edge of out-of-control in an effort to make up lost time.  Well, I guess you could say that it was out of control, because about half-way down, Dan end-o’d.  He flipped over his bike and rolled over the big boulders in true T.J. Hooker style.  Since I was on his tail (flashbacks of running over Jo in Vegas), I came to a quick stop and asked if he was ok.  He said, “Yep.  Just go.”  With that I resumed my pursuit of reclaiming as many positions as I could.  I finished up Rigamortis without crashing (thank goodness) and continued looking for more positions to reclaim as fast as I could.

I passed two more people, the last of which was Mark Russell, just as we came into a waterstop (manned by a friendly bearded fellow with a broken arm).  I asked Mark what place we were in.  He said 6th and 7th.  “Actually, that’s not true, as it’s more like 4th and 5th since my buddy and I went off course.”  He paused for fluids at the stop and I kept on trucking.

Mark caught back up to me as I climbed a hill and came out into a grassy field.  “I’ve been here before.” I said to myself recognizing that this is where we ended up when we went off course.   I climbed the the hill, through the mud and up another steep, rocky hill with Mark closely behind.  As we came into the last waterstop, as I flew past the volunteers, I asked what position I was in.  I received several different answers and quickly dismissed them as inaccurate.

I thought I had the position well-secured as we approached the end of the bike course.  I recognized it as the tail-end of the bike since it’s shared as the tail-end of the run course.  Just as we approached the opening in the trees, Mark put the hammer down and passed me.  It was obvious that he calculated the move, having raced there last year.  Great move, Mark!  I finished right behind him.  If Dan and I wouldn’t have gone off course, we would have surely made top 3.

Also in the news, Jo Markham hammered out the 1st place female (and of course 1st place in her age group)!  Dan finished 5th overall and 3rd in a tough 35-39 age group.

My final thoughts on the XTERRA Ace and the Ace Adventure Center are all positive.  All of the staff were very laid-back, super friendly and fun to chat with.  This included not only the race staff, but the staff all over the adventure center (cafeteria, bar, checkin, etc).  The race course was fun as heck!  I can’t wait to get back up there and race it when the swim is doable.  You should seriously consider this awesome race as part of your 2011 calendar.  My hat’s off to the race director, staff and volunteers.  They all did an awesome job!