When we showed up on Friday for a pre-ride and run of the XTERRA Hickory Knob course, it was vastly different weather than 2013.  Last year, at race time, it was raining, cold and water in the mid-50’s.  In that race, I didn’t warm up until I was in the showers after the race.

This year, it was sunny and mid 70’s before the race, but there was what appeared to be a fog cloud in the air.  You don’t have to be a weatherman to know that sunny and 70 is not typically when you have fog.  That’s because this cloud wasn’t fog after all, but instead a haze of pollen in the air.  The ground was covered in a layer of yellow as if it was a dusting of snow and you had nice little puffs of it with every step.

The trail was even worse and several times during my preride, I’d stop and look behind me to see the yellow cloud that I had stirred up resettle to the ground.  I’ve raced in dusty conditions, but this was definitely taking it a step farther.

During my Friday ride, I kept having issues with my front derailleur dropping my chain down to the small ring.  I’d push it back up only to have it drop back down in a quarter mile or so.  After getting it back to the room, I noticed that the cable housing was broken and needed to be replaced.  I had spare cable housing with me, but didn’t have any new ferrules, so I just reused the old ones.

Saturday, Alba and I went to the park to support Dan during his 50k race.  He had it all planned out and nutrition was easy since it was a multi-lap loop and could just take on what he needed after each lap.  Even though he didn’t NEED anyone there, I felt it was good to be there anyhow and to cheer him on.  He had an outstanding race and won first overall with a time of 4:01.

A group of us met up for another pre-ride and run where I continued to have cable issues.  While waiting, I met numerous other racers and gave them directions on the course, answered questions and generally shot the breeze.  Really neat to meet a bunch of new folks to the sport. 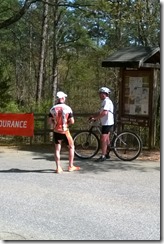 During our Saturday pre-ride, my use of used ferrules came back to bite me and one of them was sucked into my frame.  I began to run through all the scenarios in my head of where I would get replacement ones and what I’d have to do if I couldn’t get them.  I managed to find a shop, Chain Reaction Cycles, about an hour away that had the Niner-specific ferrules and caught them just before they closed.  They hooked me up and wouldn’t even take so much as a beer for payment.  By bedtime, I was back in business. 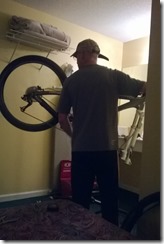 The swim wasn’t near as cold as it was the year before.  Heck, I actually think the temp (around 60) was quite comfortable.  It was a three lap, out and back, that was advertised as an 800, but after all estimations (from time and other experienced triathletes), we feel it was more like 1200.  On the first lap, my goggles fogged up nicely so when we came out of the water at the end of the lap, my intent was to pull them forward and just give them a lick each.  In my effort to do so, the straps popped off with a loud snap and I had to stop on the shore to fix them.  Time wasted.

The rest of the swim went pretty well with the exception of the last lap.  A group of swimmers were headed out on their last lap while I was in a group headed back in.  The outbound group drifted over into our oncoming traffic and I managed to hit, head on, with another swimmer.  Literally head on.  I sat up, seeing stars, and quickly realized what the heck was going on.  I lunged forward, shook it off and attempted to get back into a rhythm.

The longer swim didn’t work to my advantage against the better fishys, but it was still a good one and I felt pretty good.  Coming out of the water in 11th place, I had the most horrible time getting out of my wetsuit. Being one that takes pride in having very quick transitions and having done it many times before, the more I struggled with it, the more agitated I became.  Normally, I can shed it with a single yank of the cord, but for some reason, with how I had it setup, the velcro just didn’t want to give way.  Guess I need more practice to dust off the cobwebs.  What should have been a 30-40 second transition ended up being more than twice that.  I still managed to gain one spot in transition.

Not much to report about the bike leg of the race as I had a fairly clean ride and only crashed once.  Even the crash wasn’t anything spectacular or super-technical, just me not paying attention and letting my pedal get caught on some rocks.  I ‘spose it had to happen, because it was the first race with my new bell and it wanted to get broken in correctly.  It gave out a nice ring when it was slammed across the rocks.

I didn’t have any issues with the Schwalbe Rocket Rons hooking up, even with the thick layer of pine straw.  Even though there were doing an outstanding job, there were a few spots that were so loose that no tire would have done well.  The Rons coupled with a little caution allowed me to stay upright.  Not being able to take the hands off the bars but in a few spots, I primarily used GU Roctane drink as my fuel during the bike.  When it came to passing and being passed, there was a little leapfrogging going on and even though I managed to gain a few spots, it wasn’t near as fast as my bike leg should have been.   I finished the bike leg in 8th place.  Looks like I’ve got some homework that needs to be done.

I knew going into the run in 8th place that if there was any chance of topping off the age group or getting on the overall podium, I had to pretty much run my arse off.  I had no idea who was ahead of me or how many were in my age group, but knew Dan was up there given the absence of his bike in T1.  Josh and Jason had both passed me on the bike and I could see someone on the road ahead of me, although I didn’t know who.  By the time I passed Alba, Kim and Meredith at the barn, just before we dove into the trail, I could see I was already reeling in at least one person.

I moved up to 4th place on the run before exiting the trail and hitting the road back to the finish.  Josh was hot on my heels so I just kept increasing the pace on the road to try my best to hold him off.

Overall, it was a great warmup race for the season, allowed me to check my fitness and to see where I need to make improvements.  Congrats to everyone that came out and it was great to see all of my XTERRA family.  I would have been able to spend more time with them, but a last minute bike shop run prevented it.  Hopefully I’ll get to spend more time with them at the next race.