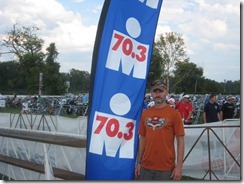 There were a little over 3000 athletes in the race, which was surprising as most of the races I have done are only a couple of hundred.

Since I am a mountain biker and not much of a roadie, I don’t own aero wheels.  So, a week out from the race, I took a look at the weather report and it was forecasting 10mph winds with 25 mph gusts.  Not wanting to be blown off the road, I decided to forego a disc, 808s or whatever.  Instead, I secured a pair of Reynolds Assaults (~45mm) wheels.  Of course, to my disappointment, the forecast changed and there was no wind.  Arrrgggh.  Too late to get anything else.

It being my first Ironman race of any sort, I was very, very surprised at how organized and smooth flowing the check-in process went.  Smooth as butta.  Despite the number of people there, I was checked-in and had everything ready to go in about 10 minutes.  It took me longer to find a parking spot than it did to get through the check-in.  The transition area was huge and there was an endless sea of bikes (the port-a-pottys in the pic below should give you some perspective, not to mention the swim and run in arch in the distance).  I walked around transition a bit to get acclimated with where everything was and some point of references to where my bike rack was located.  I got everything in place, kissed my bike goodnight and headed to the hotel. 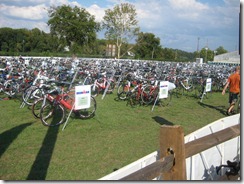 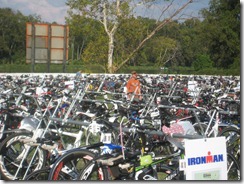 One hassle/disappointment was the fact that since it was a point-to-point swim, we had to check our bikes into transition which was 1.2 miles away from the swim start.  Made for a bit of a hectic race morning, but it would be the only hassle of the day. 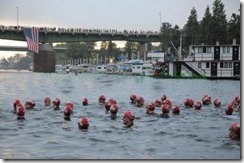 I don’t know how many swim waves in total there were, but I was in number 12.  My age group, Men 40-44, had 504 competitors in it alone.  So for only our age group, there were three waves of swimmers.  It was broken alphabetically and I was in the first wave of our group.  People lined the bridge we would swim under in order to watch the swim.  Hanging from the bridge was a HUGE American flag which was very cool indeed.  We slowly made our way to the river and with the sound of a horn were off.  In usual fashion, it was a bit of a washing machine start.  Since we were swimming down-river, I decided to swim as close to the buoys (as far from the shore as possible) in an attempt to catch as much of the main channel current as I could.  Several times, the current tried to pull me further out into the channel, but with a slight correction, I was back on course.  By the time I reached the swim exit, I had caught up with the tail-end of the previous waves.  I was one of the first swimmers in my wave to exit.  I would later find out that I was ranked 37th in my age group for the swim with 25:05. 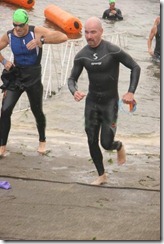 Again, the transition area was HUGE and after running what seemed like forever to get all the way around transition and then to my bike rack, I finally realized why there were 5 and 6 minute T1 times.  I came in at 3:59  Ugh.

Not having raced a 70.3 before, I wasn’t quite sure what kind of goal to set for the bike.  I had done a few calculations to figure out where I would be at in the standings (based on last year’s results) depending on what average speed I maintained.  As the bike leg progressed, I just maintained as hard of a pace I could while still maintaining something in the tank (leg-wise) for the run.  I spent the entire leg of the race passing folks in previous waves and was passed by a few in my age group.  The country-side was absolutely stunning and there were often people sitting in their driveways clapping or cheering you on.  One exception was some greasy-looking fella standing in his driveway holding a sign stating, “Go Home.  Get off this road.”  I guess he didn’t like us bringing all of the economic stimulus to his community. 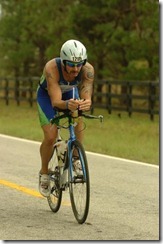 Every water stop was well-manned and had a ton of opportunities to grab water, other fluids or gels.  There were at least 15 or 20 volunteers in a row holding something out.  They did an outstanding job yelling out what they had to offer.  I took water at two stops and they were passed off perfectly without having to even slow down.  I think it helped that I would look right at the volunteer and point to them to signal I would be taking their offer.

I maintained a pretty steady pace without over-doing it.  Even with all of the passing going on, I only lost 3 spots on the bike and dropped to 40th in my age group with a time of 2:32:43.

Again, a long run through transition after a speedy change at T2. 1:47 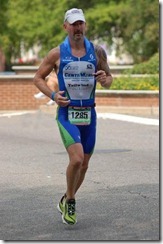 The run is usually my strength and this would hold true for this race.  I was off onto the run, again just trying to maintain as fast and consistent pace as I could.  I figured consistent was probably just as important as speed. About a quarter-mile into my first of two laps, I was passed by Amanda Lovato on her second lap.  Was kinda cool to see one of the pros run by.  I didn’t even attempt to keep up with her.  I joked however and said to her that if she was going to pass me, she had to at least throw me a tow-rope.  She chuckled slightly, but I could tell she was pushing pretty hard.  I maintained a 7:20 pace for the first lap and was pleased.  My goal was to maintain the same pace for the second lap.  As I came into a water stop at mile 8, I grabbed and chugged a cup of water and began to choke a little.  I stopped to walk it off which proved to be a bad, bad thing.  Before I knew it, I had walked through the entire water stop, wasting valuable time.  I told myself to get moving and was doing fine until I got to the stop at mile 10 (or so).  I grabbed ice and a sponge and fiddled around with trying to get the ice down the back of my suit, again wasting valuable time walking.  I got moving again and quickly returned to my 7:30ish pace.  I would finish up the second lap at 8:26 pace bringing my entire run down to 7:53.  The good part is, I managed to pass 28 people on the run in my age group bringing me up to 12th place.  If I would have maintained my 7:20 pace, I could have gotten 9th.

Primary lesson learned:  Keep running.  Do not stop at the water stops and get your business done on the run. 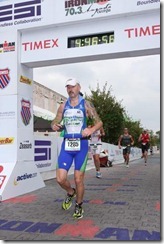 Sunshine one minute, hail the next. One of the many reasons Swimrun Maryland was so much fun. But most of all, seeing brand new swimrunners trying out the sport and having a blast. Experienced @herbertkrabel raced with first-timer @cmlafrance10 and won the mixed division and second overall. @leojlutz and @livtoendure finished 3rd mixed coming from a strong ultra running and triathlon background. Brian Link, a fast, fast runner teamed up with @kerry.jhnsn, a new trail runner and former collegiate swimmer, for their first race and placed 4th mixed. Swimrun veteran, and the mastermind behind bringing this group together, @this_is_trista teamed up with newcomer @tiffalew812 to take the top women’s podium as team @wildswimrun. Smiles and laughter were abound with this group. I think they may come back for more. ⁣
I’m in trouble. Joined the @thelowtideboyz again, this time for a little story telling of how @swimrunlakejames went down for me and @leegreene_03. Find out how I got into trouble and all the other shenanigans. It’s a long one #twss. Live now, link in my bio. ⁣
Super fun and exciting day of racing at @swimrunlakejames. Swaggy Zaddies came in 4th men’s behind teams Keith and the Unicorn, the Mighty Boosh and Kraken/Race Like a Viking. Congrats guys on an awesome race! Shout out to the Boston Wetsox for smoking us as usual. 🙂
What’s in your bottle? @guenergylabs #SHRED. ⁣⁣
Felt great to get out in the rain and run off the week’s stress with no agenda. Gravel roads were a muddy mess, but still made a smile come across my face.⁣
And in flip flops... Wow.