On April 9th, Dan and I headed up to the wonderful, friendly town of Brevard, NC to ride the 12th Annual Assault on the Carolinas.  It was a beautiful morning, just the right temp and even though the weather was forecasting rain, it wasn’t due to hit until well after the ride.

Upon arrival, we shot over to registration to pick up our packets.  We were amazed at how friendly and welcoming were the locals.  There were quite a few tents setup in the expo including the local bike shop, t-shirt vendors, GU Brew on tap and GU gel boxes abound.  There was even a “bike parking” area with plenty of bike racks to stash your bike before and after the ride.  Also in the expo area was a large stage setup with live music.

After getting on our gear, checking out the mechanicals on our bikes, we made our way over to the start line.  There were three distances offered, 40k, 60k, and 100k.  All distances started together in one mass start.  They attempted to line everyone up according to distance, but it didn’t seem to matter as everyone just ignored it. 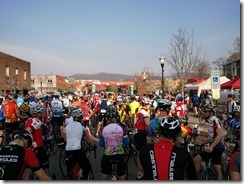 We took off in a mass start and everyone (approximately 800 of us) jockeyed for position going down main street and into the outlying neighborhood.  By the time we made it through the first couple of climbs and to the outskirts of town, everyone was spread out into small packs ranging fro 2 to 30 riders each. 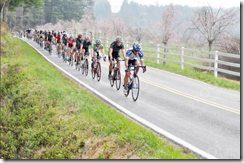 Dan and I were kind of just doing our own thing, not trying to beat anyone or keep up with anyone.  Instead we just enjoyed the ride, the scenery and the companionship.

We were pretty stoked about this ride.  It seemed to be a great way to cap off the end of base training for the upcoming triathlon season.  The course profile shows that it wasn’t a “piece ‘o cake” ride.  It had it’s share of hills including a 12% at mile X and a six-mile climb towards the end of the ride.

The curvy downhill sections were a BLAST to ride.  It reminded me of back in the day when I was into sportbikes.  Back in that day, we rode some of these same back roads to enjoy the curves.  Honestly, I’d have to say that riding them on a road bike were just as much fun, if not more, than on a motorcycle.  Even on my old trainer road bike, I still hit over 40 mph on a couple of sections.

Once we hit the 6 mile climb, I settled in mentally for what I knew was going to be long arduous climb.  Amazingly, even on the climb as I cam across other riders, everyone was in great spirits and talkative.  We laughed, joked, moaned and groaned together.  After topping the climb, I was waiting for the “15 mile downhill” that everyone had talked about.  My butt was ready for some out-of-the-saddle time.  It wasn’t exactly all downhill from there.  There were a few more drops and a few more hills before it became a decent decline.  One of these hills included a short climb to cross the Eastern Continental Divide.

We were very surprised at how many tri bikes and time trial bikes we saw. They made us envious that we didn’t bring ours, especially on the climb.  Arriving back at the finish in downtown, Brevard, we were greeted by a party-like atmosphere with free food.  I scarfed down a burger and was tempted by a beer.  I forewent the beer and we decided to head home.  We donned some Zensah compression gear for proper recovery and hopped in the truck. 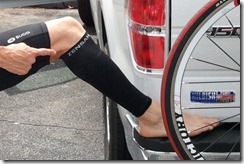 A HUGE thanks goes out to the town of Brevard and all the locals who went above and beyond in putting on a great event and welcoming all these big-city folk into your quaint town.

On the way home we saw some comfy rocking chairs that we really wanted to try.  We wanted to kick back and relax but the guy wouldn’t stop, no matter how hard we tried to flag him down.