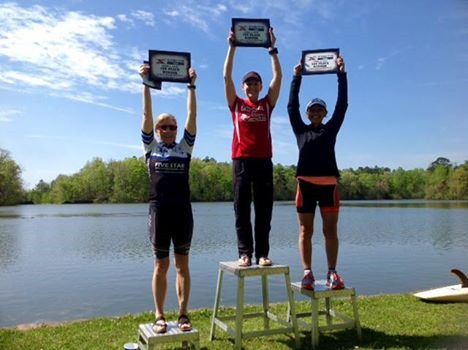 Are you an Auburn fan or Alabama fan? Well, regardless of whether you yell “War Eagle!” or “Roll Tide!”, you can race an XTERRA near both of these colleges and their names reflect their alma maters. XTERRA Tiger takes place near Auburn whereas XTERRA Tide takes place near Tuscaloosa.

XTERRA Tiger is one of those races that I’ve attempted to make for the last two years but just cannot seem to work it into my schedule. Multiple things seem to come up both personally and professionally but needless to say, it hasn’t been doable. That doesn’t stop me from wanting to keep track of all the action, so this year, I had ultrarunner, XTERRA athlete and field reporter, Sunny Workman keeping me informed.

XTERRA Tiger is one of the earliest races on the circuit and in the southeast. Many come from all over to test the waters of how their training is progressing and to get that racing bug again. Alabama, Georgia, North Carolina and South Carolina were well-represented. With it being an early season race, the water temps are low and usually wetsuit legal. As the racers lined up in the water, the temp was still dropping from the day before. At breakfast it was 63, but at race start, it was 56. 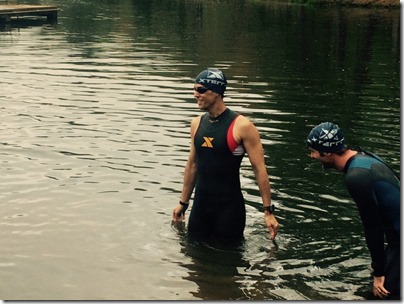 The swim looked longer than the advertised 750 meters, but no one was sure if that was truly the case or if it was the typical “oh crap, this is the first race of the season” coming out. The skies were cloudy and it appeared as if it could have rained at any moment with the sun trying very hard to break through.

There were familiar faces all over the place. Owen Workman of Pelham, AL, and husband of our field reporter, Sunny was there representing. As were other fast folks like A.J. Petrillo, Mike Smith, Sam Chalk, Travis Beam, Jeff RIchards, Robert Strangia, and more.

Loukia, who had recently come off of a two year break from racing decided to make her first XTERRA as her first race back. Like many others, XTERRA Tiger was a race to test her fitness coming off of a hard training block. “I knew I was [going] into the race tired but I tried to do my best. I felt great on the swim and came out of the water near the tail of the first pack, almost with a 3min lead in the female field,” stated Loukia.

The gap was on Christine who recalls, “It was soon apparent that I was trailing Loukia and she was pulling a substantial gap on me. After a dismal swim, my T1 suffered with struggles getting my wetsuit over my watch and chip. I started the bike 3 minutes down and had no idea if I could close it.”

Everyone bolted out of T1 and headed out onto the mountain bike trails. The trails were slightly tacky and the sun began to beam through the clouds a bit. 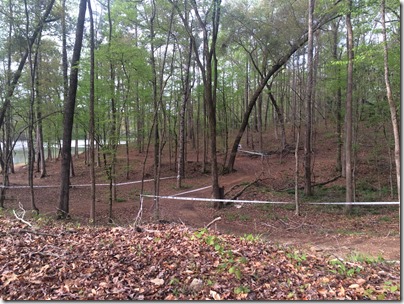 Newcomer to both triathlons and XTERRA, Chris Edmonds (35-39) had the fastest bike split of the day at 42:03 where he took the race lead on the bike. “The leaders left me on the swim. I caught back up and gained a little time on the bike.” said Chris. And gained a little he did. Coming into T2, Chris was in the lead followed closely by A.J. Petrillo. Duking it out in T2 for the third place spot was Travis Beam and Blake Gill both in the 30-34 age group.

T2 was the scene of a fierce battle on the women’s side of the house. Christine caught Loukia on the bike and they left T2 neck-in-neck with the crowd cheering and yelling.

“Luckily with about 1 mile left on the bike I saw Loukia not too far ahead and was able to regain position. Wheel to wheel we raced back to transition to begin the final leg – it had come down to a foot race,” said Christine.

Loukia recounts the excitement, “My long mtb training days in the GA mountains the past week had made my legs feel flat on the bike and I did not push it as much as I could. The second female, Christine Grant, was able to catch me on the last mile of the 10 mile loop and we got out of T2 at the same time!”

“We rounded the corner and I gave it a hard push to lengthen my stride with the hope of pulling away. The results were positive and I tried to keep the pressure on without looking back,” said Christine as she maintained the lead for the run, but not without effort from Loukia.

“I knew my running was not up to speed as I had only been running for 3 months but I tried to stay with her during the first mile. Then I lost her and with her I lost the overall win by 2 minutes. It was fantastic to race with good competition and be able to push even on a difficult day!” stated Loukia.

The men were racing hard on the run as well with A.J. Petrillo having the fastest split of the day at 21:37. He was closing the gap but not quick enough with the amount of real estate he had to work with (yes, that’s a pun). Chris confirms as much by stating, “Glad the run was short. Any more running and AJ would have caught me.” 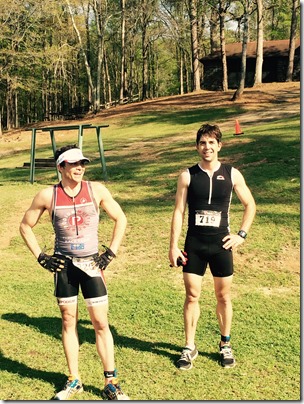 Well, it sounds like it was a great race indeed, not only for the competition and great race course, but also some post-race local treats. “We walked around the stunning AU campus, had great tacos and fresh-squeezed lemonade at the famous Toomer’s Drugstore! We will definitely return next year!” says Loukia. Look out ladies, she’s coming back. You can keep up with Loukia’s journey on her blog.

Be a Warrior!
Marcus