So many updates, where do I start?

First and foremost, we had a beautiful day for the XTERRA Whitewater Transition Clinic and Preride.  We had 10 athletes show up of varying levels of skill from all over.  “Representatives” from Charlotte, Greensboro and Myrtle Beach were present and accounted for to name a few.

We started a little late due some “cross pollination” of clinics.  Most of our attendees were intermingled with the Dirt Divas Skills Clinic by mistake.  I just happened to stop by and say high and we discovered the mixup.  After a quick roundup, we got started with the transition clinic.

We hit the trails to ride the 14 mile mountain bike course that would make up the bike leg of the race.  Whitewater Center Trail Guru, Lee Flythe and crew have been real busy out there building new trails and extending existing ones.  With a new mix of hand cut and machine cut trails recently added, the ride was fun and challenging.  If you missed out, I hope to see you all at the next clinic scheduled for June 22nd (you can RSVP here).  Thanks goes out to USNWC Events Manager and XTERRA Whitewater Race Director Adam Bratton.

I followed up the clinic and pre-ride with a tough EPC Multisport brick workout that damn near kicked my butt.  I barely had enough energy to cut the grass when I got home, but I managed to get it done.  Exhausting but fun, fun day.

On the racing front, the inaugural XTERRA Knoxville was held on Saturday with what was reported as some of the best single track out there.  “One of the toughest mountain bike courses I’ve ridden; fun dry but quite treacherous wet.” said Charlie Epperson, XTERRA Pro that came in second overall just behind fellow XTERRA Pro Takahiro Ogasawara (Oga) from Japan.  He continued, “I came into T-2 maybe 4 or 5 minutes down from Oga and a minute back from Josh. I felt great running and was able to make up some ground on Oga but not enough. I’m happy anytime I’m within a few minutes.”  Josh Schaffer came in third overall and was the top amateur at the race.  He also doubled as XTERRA security since he camped at the venue.

On the ladies front, XTERRA Pro, Mieko Carey was second overall out of the water and rode with Charlie for a good portion of the bike leg.  She won the female division with Andrea Ludwig and Lucia Colbert coming in 2nd and 3rd respectively.  Full Results

As with any first-year event, however, it wasn’t without its share of snafus.  Apparently, the trails lacked enough markings to keep everyone on track and racers got off course.  First-year XTERRA racer, Jheremy Zetans came to the rescue.  He saw what was happening and decided to terminate his own race to give a lending hand by directing racers back on course.  Talk about XTERRA spirit!

Charlie went on to provide a small tidbit of advice, “I know a couple of riders and runners got lost today. Always a disheartening experience. I’ve been there. My advice is to take the extra day to arrive early to ride and run and be able to race without that element of uncertainty.” 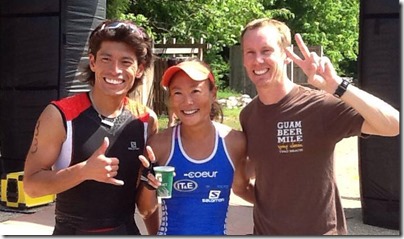 Speaking of XTERRA Pros Charlie, Oga and Mieko, they will be teaming up in the first ever XTERRA Pro pre-race shoot-out in Richmond.  The pros will be split up into 3-person relay teams on a very short course highlighting aspects of this weekend’s XTERRA East Championship course (Jun 15).  It’ll be fast and furious action with the winners expected to knock it out in 15 minutes.  The teams that have been made up are very interesting to say the least.  You can check out who’s on what teams at the Pro Relay Team Shoot-out webpage.

Even better, not only can you witness this in person, but the title sponsor, Luck Stone, will be broadcasting the event live so you can view online, complete with video and GPS tracking via their website at www.luckstone.com.  If you can break away from what you’re doing, THIS Thursday, at noon (Eastern time), you should definitely check this out.  I plan on being there in person (hopefully), so keep an eye on my Twitter and Facebook feed and I’ll try to give ya another avenue to keep up on the action (and some cool pics).