XTERRA Myrtle Beach appears to have been a big success, at least that’s what I could tell from afar.  I was all signed up and excited to do this race, especially since we’d made a trip down a few weeks ago to pre-ride and run at the Horry County Bike and Run Park, aka "The Hulk".   However, a last minute decision dictated that I wouldn’t be able to make the trip, so instead, I spent the last several days texting, emailing and calling all of my XTERRA family to get the scoop.  At least I could live vicariously through them.  Here are the details from talking to folks.

One very interesting story behind the race is the challenge that race director, Andy Kennedy dreamed up called the “XTERRA Ultimate Endurance Challenge”.  This was a challenge to race the Hickory Knob 50k Trail run on Saturday, April 5; the XTERRA Hickory Knob Tri on Sunday, April 6; the Myrtle Beach 50k on Saturday, May 3; and the XTERRA Myrtle Beach Tri on Sunday, May 4.  Yep, you read that correctly:  two weekends of 50k runs followed by XTERRA triathlons.

Dan Kimball took just such a challenge. “I wasn’t even sure I could do it when I signed up, but once I signed up, I was committed,” he said.  Dan not only tried, but succeeded in doing all four races, and did so with great success winning the Ultimate Endurance Challenge.  He won first overall in both 50k races, and 2nd overall at the XTERRA Hickory Knob triathlon.

He admits it definitely wasn’t a cake walk and that along with months of physical training preparation, it also took mental fortitude.  “After doing the Myrtle Beach 50k, I just wanted to go home.  I was sore, tired and dehydrated.  I really didn’t think that I could complete the [triathlon] race the next day, but it just goes to show that your mind can overcome the physical,” Dan stated.  He led the triathlon for most of the bike leg and held onto second place until the last mile or so of the run.  Dan continued, “Having ran the 50k the day before, I just couldn’t sprint it in with the others.”  Sprint finish or not, Dan finished 5th overall at the XTERRA Myrtle Beach triathlon, pretty high in the field of fierce competitors, despite having won the 50k the day prior. 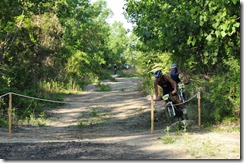 Other racers had their own mental challenges during the XTERRA Myrtle Beach triathlon.  “I crashed on the first whoopee during the bike and broke my seat and sunglasses,” says Patrick Clark who went on to finish 2nd overall.  “It was frustrating but it motivated me enough to have a good run,” he added.  Patrick went on to say, “Considering the challenges, I think it was more than a pretty good day for me.  The only frustrating part was how close I was to an overall win. Without the crash I might not have had the drive to run as hard.  It’s what makes this sport so great.” 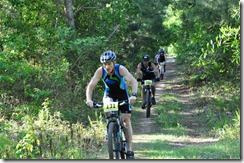 Patrick finished only seconds behind Josh Schaffer who not only won XTERRA Myrtle Beach, but also placed 3rd overall just one week prior at XTERRA Fort Yargo.

“This is the third XTERRA that I have competed this year and I have been having a great time!  The Myrtle Beach race is new to the series this year and I was excited about seeing the venue for the first time.  One of my good friends, Chris Hollingsworth, a local triathlete and training buddy, was one of the volunteers so I knew that the race was in good hands,” stated Josh Schaffer.  He added, “I was also looking forward to seeing my new XTERRA friends that I have met doing these races.  Everyone is very friendly and we are all having a great time regardless of our abilities and motivation.”

On the bike, under the pressure of racing, things can sometimes get a little weird.  “The trails loop around each other and I started to feel like I was in a house of mirrors. I would see other riders on other parts of the trail and couldn’t tell if I was chasing them or being chased,” said Josh who realized late in the race that he was having a better race than he expected.  “I didn’t even know I was in the lead until the turn-around point on the run,” he stated.  The race was truly a battle with the lead pack fighting it out in the last miles of the run.  Josh added, “I was feeling it and knew at that point it was my race to lose, so I was trying to keep the pain high and my speed up.” 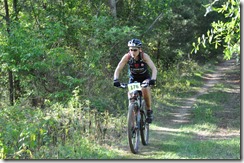 "I went into the race with a bit of fatigue from IM training last week, but I am happy with the results, " said Tanya Houghton who finished first overall female.  Tanya continued, "I felt stronger on the bike in this race, which is closer to the top times than I usually am, so my run ended up suffering a bit."

Candace Zipf keeping the heat on

Tanya came out of the water together with the other two top female finishers Candace Zipf and Jamie Burton who finished 2nd and 3rd overall female respectively.  Tanya added, "We pulled out of transition at the same time and raced to the trailhead.  We were going so fast that we went right by it.  I swung my tail around and got in first."  Candace dropped in the trail second with Jamie hot on her tail.  Candace kept the pressure on Tanya throughout most of the bike leg.  "The trail design allows you to see who was on your tail often.  She (Candace) stuck with me for a while but about 3/4 through the first lap, I couldn’t see her anymore.  She made me push real hard to lose her, " Tanya stated.

Candace Zipf not only finished 2nd overall female in the triathlon, but did so after racing the 20k trail run the day before.  She not only won the female division in the race, but was the first overall finisher.

Both races took place in the famed Horry County Bike and Run Park, aka The Hulk, which was created in the summer of 2012.  For a two year old trail system, it has come a long way for a short single track mountain bike trail in Myrtle Beach thanks to the Waccamaw Trail Blazers.  Along with the Trail Blazers, the trail underwent tons of volunteer work including last-minute trail maintenance and all course marking for the race by volunteers from the Myrtle Beach Triathlon Club.   Not only did they use typical arrows and tape, but even went hard core by adding wooden stakes and rope to keep the racers on course.

“The course was extremely well-marked and all of the volunteers were outstanding.  Thanks to their hard work and support, both the 50k and triathlon were great races.” stated Dan Kimball. 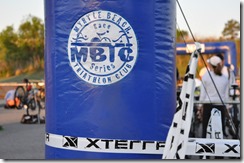 Local racer, Brad Stone commented, “For an inaugural event, it went extremely well. Very fast, fun course! What a blast!  It was impossible to make a wrong turn. The trail markings, volunteers, and transition area were superb! You won’t want to miss this one next year!” 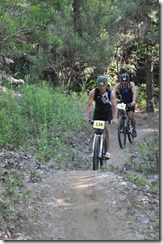 Local, Wade Davis with Ali Arasta hot on his tail

The park has an interesting history which you can read about at  http://mbtriclub.org/hulk/.  “I did my first off road race at HK a few years ago. I fell in love with the sport and wanted to help set one up here,” said Pete Politis of the Myrtle Beach Tri Club. He added, “We had about 15 members volunteering today and about 10 racing.  Our club has several members on the trail building committee. We have been preparing for this race for over 2 years. We are looking forward to next year!”

Well, it truly sounds like I missed an awesome racing weekend.  I registered for this race early but couldn’t make it.  Looks like I have to add this one to my racing calendar again next year.  In the meantime, if you find yourself traveling to the Myrtle Beach area, be sure to take your bike and look up the Waccamaw Trail Blazers and Myrtle Beach Triathlon Club.  They’re an extremely welcoming bunch and can make sure you have some fun stuff to do.

BIG thanks to Sherry Stone for most of these photos!!