As a last-minute decision (you know me), I decided to do the Tree Shaker.  Well, it wasn’t exactly last minute.  Dan and I were out riding the Anne Springs Close Greenway trails the week before the race.  He had already planned on doing the race several weeks before as a preparatory race leading up the the Swank 65, which we are both signed up for.  The Monday following our ride (5 days before the race), I decided what the heck, I’ll do it too. 6 hours of mountain biking sounded fun, and after all, I would be doing the Swank, so it would be great training.

The morning of the race, I gathered up all my water bottles, nutrition, bike and what-not and headed out to the greenway.  I was sure that I had too many bottles for the time being spent, but I figured having too many was better than not enough.  Besides, one bottle was for breakfast and one for recovery (before beer).

It was a beautiful and slightly brisk morning as fall seemed to be settling in upon us.  Neal Boyd had his usual, awesome setup with finish/lap area and flag tape along the pit area.  Folks were already setting up pop-up tents and getting their gear ready as I met up with the other Tailwind folks.

The goal of the race was to do as many laps in the 6 hours as I could and as fast as I could. My goal was 7.  As the race got underway with one mass start (6 hour riders, 12 hour riders and teams for both durations), it was a mad dash to the trail head.  We had a bit of gravel road at the start to help thin us out before crossing the start line and beginning our first lap.  I didn’t want to completely blow up during the sprint start, but on the other hand I didn’t want to get caught in a bottleneck of riders all trying to squeeze onto the single track.  I’m not sure what position I was in, but I knew I was in the top 10 starting the first lap.

I was trying out a new saddle from Cobb Cycles, the Cobb Plus DRT but still didn’t have it dialed in.  After a couple of rides on the saddle, I THOUGHT I had it perfect.  I breezed through the first lap but started to question whether or not I had it right come mid-second lap as I was feeling a little lower back discomfort.  My plan was to stop for a fresh bottle after the second lap and decided to take the opportunity to adjust the saddle a little.  After swapping out the water bottle with a fresh one from the cooler, I grabbed a hex tool and adjusted the saddle and tore off for my 3rd lap. 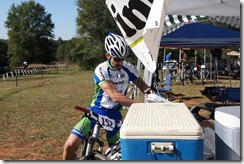 Before halfway through the second lap, right in the middle of the Sugar Loop trail, I pulled over.  The saddle adjustment hadn’t fixed things but rather had made them worse.  So I ripped open my seat bag, pulled out my Crank Brothers Multi-17 and adjusted the saddle back to where I had it before.  For whatever reason, it worked like magic.  The discomfort went away and I rode the rest of the race without any saddle problems whatsoever.  However, I lost 3-5 mins in the process of the two adjustments, which would haunt me later.

The rest of the race was awesome.  Obviously you end up fighting some mental demons, but if you can keep them at bay, you can usually do much better.  I fought a bit of my own out there, one of which was the lack of a watch.  In usual Marcus fashion, I left it at home by mistake and didn’t realize it until I was almost at the race course.  I dismissed it and figured we’d have a race clock which would help me with figuring out pacing.  I knew I wouldn’t use the watch that much out on the course, but rather just wanted to see my lap times.  After the first three laps, due to the saddle adjusting, I completely forgot to even look for a race clock.  On my fourth lap, I realized there wasn’t one.  On my 6th lap, I noticed that someone had a clock in one of the pop-up tents that had the time-of-day.  After glancing at it to see what time it was, I asked Neal the race time as I passed the finish line.  This allowed me to do the math to figure out my lap time.  I had over an hour to make the last lap cutoff and knew I didn’t have to blow it out to make it.  I pulled back on the pace a little to save some energy for the 6th and 7th laps.

I finished up the race in 7th place overall.  On a couple of my pit stops, I asked Tiffany (who took most of these awesome pictures by the way) what lap I was on.  Best that I can tell, I held 5th place for the first couple of laps, but lost two spots during my saddle adjustments.  I held 7th for the rest of the race.  Lesson learned: get everything dialed in BEFORE the race.

Dan took 3rd place overall with the fastest bike lap out of the 6 hour single riders.

Much fun was had by the entire Tailwind team and some outstanding racing in the process.  Team Tailwind included Dan Kimball, Me, David Booth and John Hopkins racing in the solo men’s category and Scott Bennett/ Dean Hagey racing in the duo category and the first ever race for either of them.  You should also read John’s Race Report as well.

ÖtillÖ Catalina Swimrun. This member of a female team sums up how we were all feeling. Breathtaking, tough-as-nails course. Jessie and I finished 10th mixed team and had a blast doing it. So much fun. More video and pictures coming later today! ⁣ ・・・・⁣⁣⁣⁣⁣⁣⁣ @jessie_ko | @guenergylabs | @orangemud | @otillorace⁣⁣⁣ ・・・・⁣⁣⁣⁣⁣⁣⁣ #guforit #lovecatalina #catalinaisland⁣⁣⁣⁣⁣ #orangemuddirtunit #swimrunner #weareswimrun #running #runner #trailrunning #trailrun #otillo #racing #workoutmotivation #motivation #tritraining #triathlete #swimbikerun #swimrun #pointseries #openwaterswimming #optoutside #techincalrunning #gottaloverocks #speedylizard ⁣⁣⁣⁣⁣⁣ .
Start of #SwimRunGeorgia put on by @peakracingevents. Get into this race! If you’re thinking about swimrun, this is one of the best to try. Two distances, not too technical and professionally ran. Solo option available too. One of my favorites. SwimRunGeorgia.com⁣ April 19 ・・・⁣ #swimrun #weareswimrun #swimrunner #openwater #openwaterswimming #swimming #swimmer #trailrunning #trailrun #runner #running this is not #triathlon but good for a #triathlete #triathlontraining #tritraining if you #swimbikerun leave your #bike at home #speedylizard