Last week I received my latest “care package” from GU.  Inside was two 48-pack boxes of GU goodness.  In each 48-pack box was a new flavor.  In one, Vanilla Gingerbread GU and in the other, Pineapple Roctane.  For those of you that don’t like caffeine in your GU, these flavors are for you as neither contains caffeine.

I typically use regular GU (my current favorite being Tri-Berry) for regular training.  For races and hard workouts, I’ll use Blueberry Pomegranate Roctane (hence the photo at XTERRA Panther Creek).

I was eager to try these new flavors and I have been using them for my workouts over the past week.  The best way to describe the Vanilla Gingerbread is to think of  Gingerbread Latte from Starbucks.  There you have it.  It’s an awesome flavor and makes you feel as you’re having a desert! 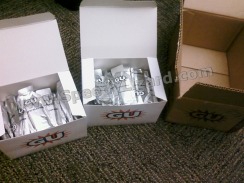 Knowing that Blueberry Pomegranate Roctane is AWESOME, I was a bit skeptical to try out the Pineapple Roctane.  Pineapple is one of those flavors that is hard to mimic and most companies that try to duplicate it usually get it all wrong.  If they get the flavor right, it tends to be over-powering. 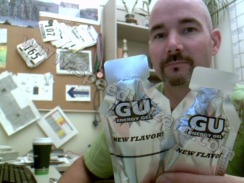 The first time I tried Pineapple Roctane was on a long mountain bike ride in Pisgah.  This ride started out with us climbing right out of the parking lot.  We climbed non-stop for 40 minutes and then hiked/climbed for another 15 over some tough terrain.  I had hit one of the Blueberry Pomegranates about 15 minutes prior to the ride.  At the top of our climb, I hit the Pineapple Roctane.  We had just stopped at an intersection and was discussing which trail we should take.  I was mid-sentence when I started downing the Roctane.  I was distracted to say the least.

I love it.  I like it so much that Pineapple Roctane has now become my new favorite, bumping Blueberry Pomegranate down a notch.

Here’s another cool video from the same ride