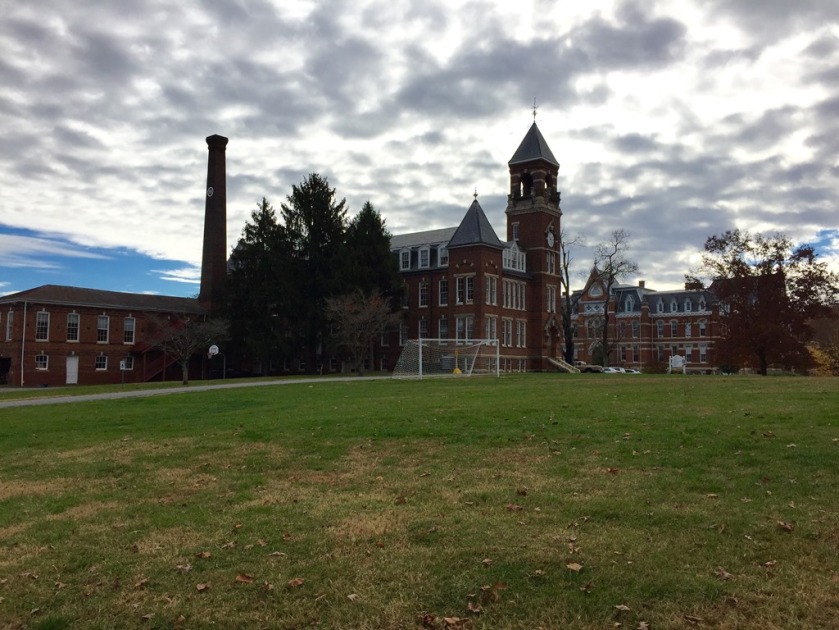 The other day a race popped up on the XTERRA race calendar for 2017 that may look familiar to some, called XTERRA Charlottesville, but the race on the 2017 calendar is NOT the race you may know from years past.  For those that know it and may have had an opportunity to race it would recall it’s technical bike and run course, strewn with rock gardens, creek crossings and steep, heart pounding climbs.  However, that’s not the race coming up in 2017.  The only thing in common between the two is the name.

XTERRA Charlottesville 2017 will be at a completely new venue: The Miller School of Albermarle.

Back in November of last year, I was in contact with Kate Lucas and as part of the conversation, I mentioned traveling for work to places like Virgina Tech and Richmond.  She mentioned that there was interest in having an XTERRA at the Miller School.  One thing led to another and next thing I know I’m pulling up in front of the school for a pre-ride.  She explained that when I got there, I’d know it because I’d swear I was at Hogwarts.  She wasn’t kidding.

This place looked like something straight out of a wizards movie, but instead, it’s one of the nations top-ranked boarding schools.  I hooked up with Andy Guptill, Team Director and Head Coach of the Endurance Team and he gave me a quick overview of the trails and sent me on my way.

Not long after entering the trailhead I still felt like I was in some movie and riding through the spooky forest, but on fast flowy trails.  I had a blast and the whole time I was thinking that this would make a great XTERRA course.

After my pre ride of the trails, I met back up with Andy Guptill and he gave me a tour of the school bike shop while explaining the Endurance Team program.

I was absolutely amazed at the story behind the endurance team, commonly referred to as MSA Endurance, a varsity team of 8th to 12th graders that compete in road biking, mountain biking, enduro, cyclocross and triathlon.

But it doesn’t stop there.  These kids learn maintenance of their bikes AND spend time building trails and maintaining them, all part of their curriculum.

And when I say they’re building trails, they’re not just building little romper tracks in some back yard, but instead, they’re building beautiful, flowy, birmy, challenging trails on a 1,600 acre plot of gorgeous Virginia country side.  Check out this awesome video from Adam Cohen and Will Dorn from some of their adventures of a new section of trail they’ve help design and build.  Some pretty cool video editing as well.

Didn’t wet your whistle enough?  Here’s another video that will give you an idea of the trails.  This one is from almost 4 years ago and I can guarantee you there’s been more trails and improvements added since then.

So now that I have your interest piqued about the trails, let me give you some details as I know so far about this race.

Date: May 20, 2017
Distances: 1000 meter swim, 18 mile mountain bike, 10k trail run
Location: Miller School of Albermarle
Location of Miller School: Google Maps
Website: Adventure Addicts Racing (no race info as of this writing…. yet)
Course Maps: (I’ll update this post as soon as I get my grubby hands on them)

Now, here’s my opinion on a couple of things.  I think the 10k distance might be a bit long for the XTERRA formula which shoots for the bike being 65% of the total race time.  Of course, this will depend on where the run course takes you and what trails are used.  If it does fit the formula, this could end up being closer to a regional race (as it pertains to duration) as opposed to a local one.

May 20. Yep.  That’s on the same day as XTERRA Oak Mountain.  That is a TOUGH proposition.  With XTERRA Oak Mountain being a gold level (higher points) race, that means that if you’re chasing points, you’d have a hard decision choosing which one.  That decision really boils down to what you have for 2017 season goals. They are both great, fun trails, and XTERRA Charlottesville has the makings of a great race. The big challenge we face is, that like most races, we, as an XTERRA family, want our new ones to thrive.  That means we need to support them with attendance, especially the first couple of years, to ensure they continue.

I really, truly think this will be a great race.  It’s a great venue, with some fun, fun trails and I love what the school is doing with its endurance program.  If you’re concerned about it being a new race, I wouldn’t be.  It’s not like they don’t have experience with racing there.  This was shot at the Miller School:

See you on the trails.