February 20, 2016 Marcus Barton Fun Stuff Comments Off on Back in the Saddle

Whelp. I’ve been on a short hiatus for a while, taking some much needed downtime after the WC-50 race that was a fun, but tough 50k for me.  Despite what your eyes see, I was NOT wearing a skirt.  Thanks Stephanie Moore for the awesome photo.  It captures the cold of October with the steam coming off of the water a lot better than my pink legs. 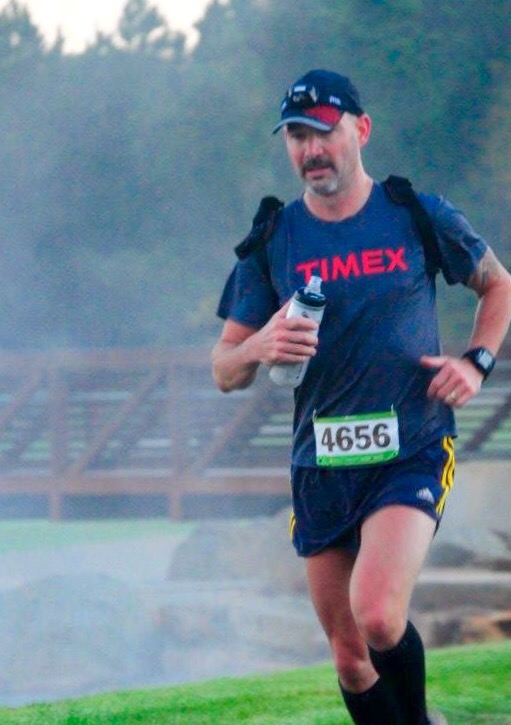 I ended up in 3rd place overall. After leading the race for the first 27 miles, a couple of experienced, fast boys taught me a few things and proceeded to spank me pretty good.  I spent quite a bit of the last-half of the last lap walking. I was fried. It was still more fun than a hog hollering contest.

After a long season of some GREAT racing in 2015, including some fun, fun action in the XTERRA points series, a couple of trips overseas to do the Rockman and OtillO, I was ready for a break from training and racing. So I spent the next couple of months just doing fun stuff and stuffing my pie hole.. well… with pie.

But here we are again, time to get serious as race season is right around the corner.

If you haven’t noticed, the website has gone back to its roots and with some of the old comes a few new things, like product reviews. I figured since folks are asking about a few racing goodies I’ve picked up, I might as well share with everyone.  I also plan to blog about a bit more than just race reports. Expect a few that include tips and tricks for the new folks starting out and maybe even a review on some trails to ride.  Who knows.  And as always, I’m open for suggestions. So, pony up ya’ll and speak up on what you’d like to see.

2016 will be full of fun again. The race calendar is shaping up and includes a bunch of XTERRAs, some oldies (but goodies), some new ones, an XTERRA trail run or two and yes, a swimrun in there to keep it interesting.

It’ll be challenging, downright grueling at times and with a sprinkle of chaos thrown in for good measure, it sounds like fun, right?

Let’s get this party started.