Getting ready for the upcoming XTERRA Whitewater race, I have been super-busy and super-sidetracked (in classic Marcus fashion).  So this race report is kind of old, but still not stale as moldy bread (or some snacks under my truck seat).

Key lesson learned in this race (or rather reinforced, as I already knew it): Don’t change anything just before race day.  Allow me to explain.

Dan and I had driven up to Richmond the week prior to the race to spend a little time on the course.  It was a great, dry pre-ride and we had a TON of fun.  Actually, things were a little TOO dry.  If you read my previous race report from Alabama, you’ll recall that I had a flat on the preride and picked up a Maxxis Aspen to replace my Ikon.  It wasn’t my first choice, but it was all the bike shop had in stock.  The Aspen would have made a good front tire for Pelham, but it did so-so on the rear.  In Richmond, it proved to be even less of a good choice for the rear.  Most of the trails in Richmond were very hard, hard-pack.  We’re talking concrete-like in some spots.  Take that smooth surface and throw in a light dusting of sand, and you have a surface that would require a little more of a contact patch than what the Aspen was providing.  Every turn, my rear would slide around.

On the eve of the race, around dinner-time, it started pouring rain and I immediately started thinking about my tires.

Throughout the rest of the evening, I debated whether I should change the Aspen and put on an Ikon that Dan had as a spare.  It was a used tire, but not anymore so than the Aspen I had on there.  Since the Ikon we had was a non-UST tire, it can be quite a chore to get the bead seated and the tire sealed without using a compressor.  Heck, it can be quite a chore WITH a compressor.  All we had was a hand pump.  I finally decided to give it a shot by taking it to a local gas station and using the pay-as-you-go compressor.  This was a big mistake.  Anyone that has used one of those pieces-o-junk knows that you stick a quarter or two (or in our case 6) to get the machine to turn on.  Once on, you have limited time to get the chore done before you have to stick in more quarters.  The other problem with these things are they don’t actually have a tank.  This means that there’s just a little piston in there creating air flow, but without any real stored-up pressure.  It’s an air pump, not a compressor. Needless to say that after trying two different pumps at different gas stations, I still had an un-inflated tire.

I decided that we need real air.  The compressed kind.  We needed a REAL service station, not a convenient mart.  So where do you go for REAL service (i.e. the mechanical kind) that you can pretty much guarantee will have a REAL compressor at 9pm?  A truck stop.  The problem was, XTERRA East Championships is called an urban XTERRA for a reason.  It’s held in downtown Richmond.  Where are you going to find a truck stop in downtown Richmond?  You’re not.  So we ended up driving almost 40 minutes in one direction to the nearest truck stop.  The guys at the truck stop got quite a few chuckles as I stood there with a bicycle tire looking for air.  They were gracious enough to point me to the compressor hose and told me to help myself.  Long story short, within just a few minutes there, I had an inflated tire.  Dan spinning the tire to get the sealant spread evenly:

I’ll save you the suspense.  The tire worked FLAWLESSLY in the race and hooked up really, really well (full tire write-up forthcoming).  We got into bed later than we had wanted due to our little adventure.

We showed up on race morning and were the first folks in transition.  Dan and I picked spots on the end of the racks where we like them.  It was like a ghost town with a sea of empty bike racks.  It wouldn’t be long before transition would be full and it would instead be a sea of bikes and athletes.

After heading over to get body marked by Janet, I decided to go all out with the XTERRA tattoos.  I knew they wouldn’t last long as the swim cap would probably rub them off, but alas, I did it anyhow. 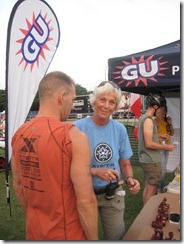 It wasn’t long before everyone started showing up and the race was buzzing with athletes, all getting ready to race.

By the time I made it back to transition, I had my Synergy Syn-Skin already down to my waist. Since I decided to put my shoes on in transition, I ended up with a 53 second transition time, 7th fastest in division.  About 15-10 seconds more than it should be.

I had a fun bike leg.  Since I had already caught up with the previous wave of bikers, I fought through traffic for most of the first lap of the two-lap bike course.  Towards the end of the first lap, my good friend and fellow age-group athlete, Frank Fernandez-Posse caught up with me.  He passed me on a gravel road just before we had to climb a long zig-zag ramp that takes you from river level up to a neighborhood.  We both had issues getting up the damp, wooden ramp and ended up running up it with our bikes, conversing along the way.  We rode side-by-side through the neighborhood and he took the lead as we dove back into single-track.  He slowly pulled away from me as I got caught up in traffic and I would not see him again for the rest of the bike leg.  “Damn, this is just like Pelham with him leaving me,” I thought.

On lap two, I crashed twice.  Nothing fancy.  One crash was due to traffic crashing in front of me.  The other was just me clipping a tree and falling over into a patch of poison ivy.  Yep.  I ended up with the itchies all up and down my left side.  Waist, butt, hamstring, and calf.  Apparently it soaked right through my already sweat-filled tri suit.  The rest of the lap went very smoothly.  I transversed stairs, drops, tunnels, narrow bridges, rock wall switchbacks and the like.  Ton-o-fun. 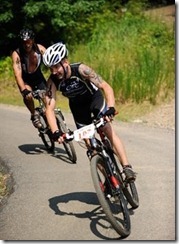 Coming into transition for T2, I had an even better transition.  I was out of the shoes prior to transition, so I ran straight on in, barefooted. I transitioned in 40 seconds, the fastest in my division.

The run was grueling.  By the time I reached the first waterstop, I had passed one guy in my division.  I felt tired, but good.  After getting up onto the flood wall, I was fighting cramps from running up the flood wall stairs.  Two guys in my division, including the one I had just passed, overtook me.  I just held on, running a steady pace and overcame the “ruins”, a set of very steep, railroad tie stairs. 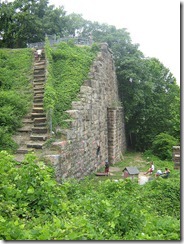 After getting past the ruins, I managed to recover from the cramps and picked off the two guys in my division as we ran down the spiral stairs.  We started running down a gravel road, I picked up my pace a little more and Kenny Shapiro comes trucking along by me.  I tucked in behind him, drafting off of him and breathing on his neck like a hot date.  We ran in that fashion all the way to a water stop that marked the entrance back into single track.  I paused at the water stop to grab some fluid and even though I was only stopped for a couple of seconds, it was enough for him to get out of sight.  I ran down the single track trying to catch back up.  I figured I would catch sight of him as I entered the dry way, a dry section of the river where we run from boulder to boulder.  No Kenny in sight.

Following the dry way, there’s one more climbing block over Belle Isle.  I was feeling much better and ran over the island without any issues.  Once I exited the trail and saw the 301 bridge, I spotted Frank Fernandez-Posse ahead.  He glances back and spots me.  I gave him a two-handed, pistol shooting gesture and a big grin.

He yells back to me to pick it up as I began running over the cat-walk.  I passed him with an effort to make up as much time as I could and in an attempt to catch Kenny.  Once on the final stretch of pavement, I picked up the pace another notch.  I noticed another person in our division ahead and picked it up a second notch.  As I passed him, my goal was to keep that pace the best that I could.  I couldn’t run any faster.  Just about that time, I passed Kathy Tank (friend and better-half to Coach Cody).  She begins to scream at the top of her lungs encouraging me to go even faster.  I picked it up a third notch that I didn’t think I had.

I finished 39 seconds behind Kenny in 4th spot.  Damn.  39 seconds off of the podium.  It was a great race and fun was had by all, except for my buddy, Mark Rudder who decided to plow into a tree in “Marcus at Pelham” fashion.  He still finished in 2nd place of his division and way ahead of me.  Hope you get better, Mark 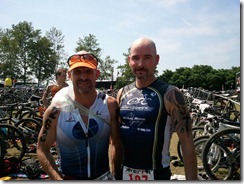 In conclusion, check out the back door of the XTERRA truck.  Can you spot the 7/10 race that YOU should be doing?