It’s been about a month or so since I updated you with what’s happening in my neck-o-the-woods.  This is not untypical of the off season and especially so with preseason when time becomes scarce and blog updates takes a back-burner. Sometimes all I can squeeze out is a quick update on my Facebook page. Most triathletes have spent the off season doing base training or getting in some long-awaited fun stuff as they take a break from anything really structured. In the preseason, race calendars are formed as races begin to publish their dates and structured training starts to get reshaped around those calendars. For me, it’s always a struggle to get back into the swing of things, but for this year, I’ve been thrown a few extra curve balls. Let’s just say it’s been reeeeeeal interesting around here.  Let’s get all of this junk out of the way now, before racing season hits.

First, many of you know my black truck as we’ve used it as a meeting spot at trail heads and get-togethers, shared goodies eaten from the tailgate and it’s hauled many bikes to group rides. Unfortunately, you won’t be seeing my signature black Toyota truck at the trails anymore.  She’s been put out to pasture.  My daughter, better half and grandson, Johonious Maximus Arailius (not his real name) went for a spin, all in the name of a good cause (to take some outgrown and unused baby clothes to a needy mom).  Without getting into the details, they ended up in a bad wreck on I-485.  Someone must have been watching over them that day, because noone involved was seriously injured.  Alba got a busted rib and seriously bruised sternum, but outside of that, everyone is fine.  Big thanks to the man upstairs.  Wear your seatbelts, y’all. 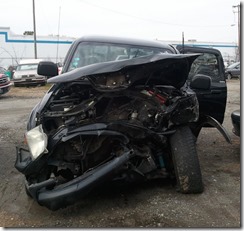 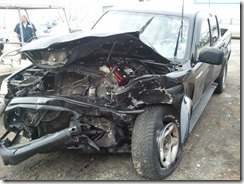 Second big wrench thrown into the preseason training was snowmageddon x 2.  The second wave was a bit more interesting and a bunch more snow than the first.  No, we didn’t freak out about bread and milk, and no, we weren’t completely stranded despite the 6 inches of accumulation we received, which is nothing compared to what we used to get when we lived in Nebraska and Wisconsin, but around here with the lack of equipment, it shuts everything down. On top of bringing the town to a screeching halt, it most certainly causes trails to be closed a lot longer than just rain. I usually like venturing out in the white stuff, however, I couldn’t even go out and enjoy it with the Little Man.  All I could do is take pictures before he went out, since I was in no shape to do so, which brings me to my next point… 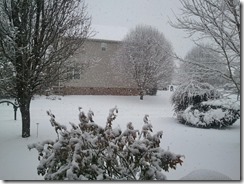 Someone or something unleashed a plague like no other within my house.  I usually do a good job being anal about keeping my distance, hands washed and everything I touch sanitized when someone else in my house is sick. My family gets a big kick out of how much of a germaphobe I can be, especially a week or so out from a race.  Little Man gets the brunt of it as I won’t even go near him when he’s sick.  I know it’s a good thing he gets sick as a kid, as it sets him up with a good immune system, but I don’t want any part of it.

Well, somehow, my usual efforts failed because I caught what he had which knocked me and Alba out for 4 solid days.  Heck, I’m still not right.  Fever, heavy, HEAVY chest congestion, coughing up all kinds of nasty brown stuff, nasal passages that can’t seem to make up their mind about being clogged or spewing, you name it.  Let’s just say that getting in any sort of a workout has been a bear.  With that said, Saturday I was finally able to do something and got in one of Cody’s superfantastic trainer workouts from last weeks program.  Not 100%, but it felt great to do something.

I’m just glad that we’ve gotten a bunch of bad ju-ju out of the way.  Hopefully the race season will give me some good karma in return.

Upcoming?  After a full year of racing and riding on my ESI Grips, it’s time for a new pair.  I’ve become the master at clipping trees hard enough to yank out my bar ends.  It’s bound to do wear and tear on the grips.  If you taunt me enough, I’ll do up a video writeup and throw out a few installation tips/tricks.  I’ll also be giving you my two cents on Orange Seal tire sealant.  It ought to be a fun one.  Stay tuned.